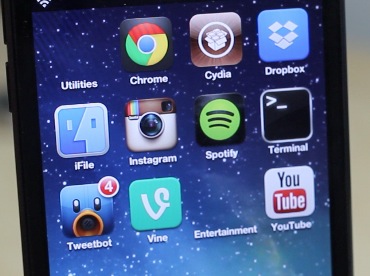 It’s not unusual to see a random jailbreak tweak appear on the Cydia store that features no real practical application. For example, the tweak may present some new visual change, but it’s not exactly useful, and in fact, at least in some cases, the tweak could make your device less user friendly.

That’s not to say that there is no place for tweaks of this sort, there clearly is, otherwise developers wouldn’t keep producing them. The latest such tweak to fall into this category is No More Folders. This is a tweak that hides the folder backgrounds and grids, essentially making the folder invisible while closed.

Have a look past the break as we showcase how No More Folders looks and performs on video.

No More Folders is a simple install and go type of tweak. In other words, you shouldn’t expect to find any options or settings to configure.

After installation, all of the folders on your Home screen will be invisible outside of the folder labels that lie beneath. Tapping on the area where the folder should be yields the standard open folder view, which is completely visible to the eye. Since the stock Newsstand app is technically a folder on iOS 6, you’ll notice that the Newsstand folder is invisible after installation as well.

Creating folders, removing folders, and every other function revolving around folders acts exactly the same as it does with stock iOS. The only difference is that with No More Folders installed, the folders are now invisible while closed.

As mentioned, it’s probably not going to be a tweak that most enjoy, but perhaps some will find a semi-practical application for its use. What do you think? No More Folders can be downloaded free of charge via Cydia’s BigBoss repo. Share your thoughts and comments on the tweak below.