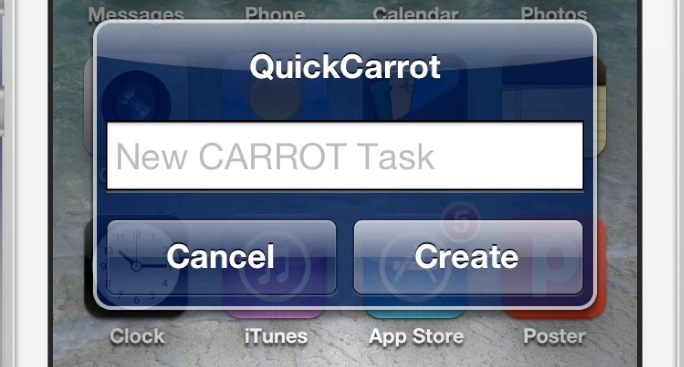 There are tons of so-called to-do apps available on the App Store, but Carrot is one that stands out in my mind as being fairly unique. Dubbed as being a “to-do list with personality”, the Carrot AI uses insults and other harmless wit to interject feeling into processing ho-hum everyday mundane tasks.

With that in mind, I’m here to discuss a recently released jailbreak tweak that works in unison with Carrot. The tweak, aptly titled QuickCarrot, allows users to quickly enter tasks into Carrot using an Activator gesture. To see how it works, take a look at our video walkthrough after the break.

While the tweak is handy for those of you who happen to use Carrot as a to-do list manager, it does have some opportunities for improvement. I like the fact that it works with Activator to perform gesture based quick input actions, but the “quickness” is kind of lost due to the fact that the QuickCarrot app UI has to load up before a task is actually entered.

It would have been nice to be able to enter in tasks without even opening up Carrot to begin with. This would have resulted in more effortless entry of tasks.