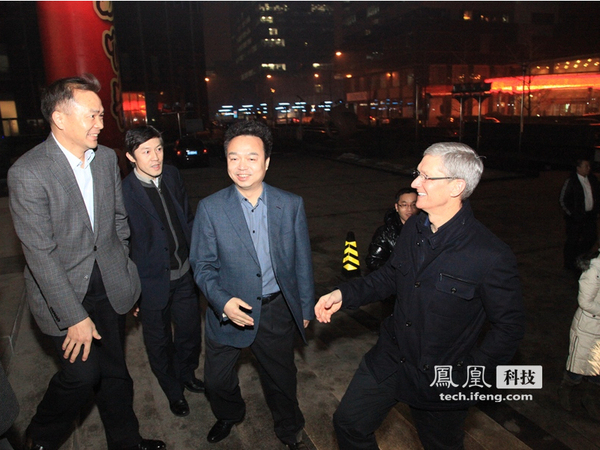 Tim Cook is back in China this week, according to a new report. The CEO is allegedly there on business, talking with the local carriers there about Apple’s leveling iPhone sales in the country, as well as its upcoming iPhone launches.

Citing sources familiar with Cook’s meetings, tech.ifeng.com claims that Cook met with China Telecom’s senior leadership this week. The talks are supposedly over, but it is not yet known if the executive has returned to the US…

Here’s an excerpt from the report, roughly translated by Google (via 9to5Mac):

“It is speculated that with the previous high-level meetings with China Telecom Cook similar, the two sides level will mainly focus on the issues discussed at the strategic level, may also be involved in co-generation iPhone and sales.

Insiders pointed out that China and the Cook high-level talks with China Telecom, may mean that the new generation iPhone will likely be listed in China through China Telecom first sale.”

This is Cook’s third [known] trip to China since he took over the CEO role in late 2011. In the Spring of 2012, he took a tour of Foxconn plants following labor violation criticism. And earlier this year he was spotted talking with China Mobile.

While the topic of this week’s China Telecom meeting was not revealed, it’s believed that the talks focused on flattening iPhone sales in the country during the July quarter, as well as plans for the upcoming budget iPhone, iPhone 5S launches.

Cook has made his intentions to beef up Apple’s presence in China extremely clear, saying on a number of occasions that it is “Apple’s most important market.” And it’s true, China is currently the largest market for smartphones and tablets.