Over the weekend, some photos of packaging allegedly belonging to Apple’s low-cost iPhone surfaced on the internet. Admittedly, the boxes looked fake, as there were a number of visible inconsistencies, but the ‘iPhone 5C’ branding on them was intriguing.

Today, our friends over Nowhereelse.fr confirmed our suspicions, highlighting a number of issues with the boxesm including odd blurred and distorted areas, and missing Apple logos. But as it turns out, the name ‘iPhone 5C’ might actually be legitimate…

First, here’s the breakdown of the plastic box issues by Nowhereelse.fr: 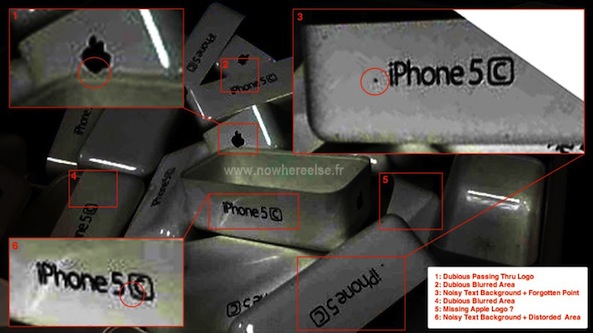 Steve Hemmerstoffer of Nowhereelse explains that he discovered the inconsistencies by adjusting the photo’s RGB levels in Photoshop and other detective work. And it paid off. It looks like original speculation that these boxes belong to Asian knockoffs was correct.

But the name might just be the real deal, according to a new report from BusinessInsider. The outlet says that it has spoken with a trusted source since the above photos were released, and it has confirmed the budget iPhone will indeed be called the ‘iPhone 5C.’

“After the photos leaked, we heard from a source that the name is going to be “iPhone 5C”. Our source doesn’t work at Apple, but is connected to someone inside the company who confirmed the name. So, this is second hand, but we feel confident after talking to our source that it’s accurate.

Our source expects the iPhone 5C to launch along with the iPhone 5S and says the leaks of colorful plastic iPhones are spot-on for what it will look like.”

While BI’s report is hardly definitive, it does corroborate the popular sentiment that Apple will call its lower-end handset the iPhone 5C and sell it as the ‘color edition.’ The upshot here is an iPod touch-iPod nano strategy, giving users features vs. color/price options.

Regardless of what it’s going to be called, the long rumored ‘budget iPhone‘ appears to be en route to market. Earlier today, a report in the current Pegatron investigation seemingly confirmed the plastic handset, which is expected to launch this fall for around $300.