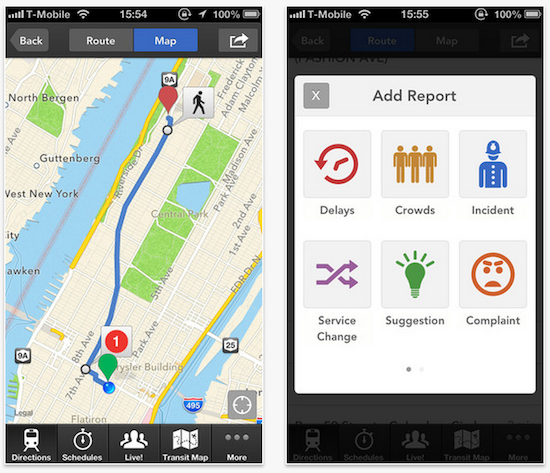 Earlier this month, Apple confirmed that it had acquired yet another mapping software company. Its name is HopStop, and it’s behind the highly popular smartphone app of the same name that provides subway schedules, maps, and a slew of other useful transit data.

And this weekend, the app gets even better with its first update since word got out about Apple’s acquisition. The update brings the app to version 2.6, and includes a handful of new features and improvements such as real time delay and incident reporting, and more…

The new reporting feature is actually pretty cool, as it crowdsources important data that can help you on your travels. Imagine being late to work, and being able to check to see which subway stops are the most crowded, or if the train is too delayed so you can hail a cab.

Obviously, the ability to save your Home and work addresses will also come in handy, as will the new search screen shortcut to your saved trips. And folks in the newly supported cities will certainly be glad to see that they can now use HopStop and all of its new features.

If you’d like to check it out, you can find the latest version of HopStop, for both the iPhone and iPad, in the App Store for free. It’s worth noting that the company has discontinued the app for Windows Phone, so it might be worth grabbing it sooner, rather than later.