On Wednesday this week, Google unveiled a handful of new products. There’s the second generation Nexus 7 tablet, Android 4.3, and the Chromecast TV dongle. The latter has proved rather popular, selling out in most online stores within the first 72 hours.

The accessory is very similar to the Apple TV, or the Roku box, as it lets you stream Internet content to your television. That content varies, however, depending on which product you go with. So we thought this breakdown of their differences was worth a look…

The following comparison chart comes from Danny Sullivan over at Marketing Land, and it shows which subscription and rental streaming services can be used with each device. Remember, we’re just looking at the Apple TV, the Roku and the new Chromecast: 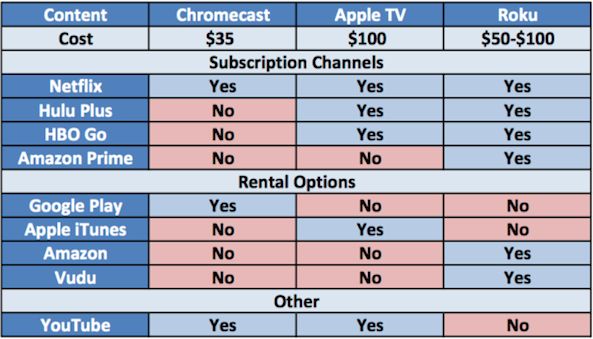 Obviously, everyone’s priorities are different, and folks will typically go with the product that meets their feature/financial needs. I’ve made a number of purchases in Apple’s ecosystem, for example, so iTunes support is a must for me. But that doesn’t apply to everyone.

It’ll be interesting to see this space grow in the coming months/years. I’m not sure what Roku has planned, but both Apple and Google seem pretty intent on making a bigger play in the living room. Apple, the last we heard, was working on a deal with Time Warner Cable.