Apple on Monday quietly announced its users have subscribed to one billion podcasts through iTunes. The milestone is being celebrated via a special iTunes section that includes the What’s Hot and New & Noteworthy sections.

There are now 250,000 different podcasts in more than a hundred languages available through iTunes…

From comedy to hard new to sports to innovative educational content and so much more, podcasting has transformed the global media landscape. Podcasts on iTunes launched in the summer of 2005 and since then, we’ve seen countless episodes downloaded and streamed.

But the heart of podcasting is finding your favorite voices in this exciting field and subscribing to the best ones. To celebrate reaching 1 billion podcast subscribers, we’re highlighting some of the most popular podcasts of all time, as well as a collection of captivating new shows.

Per MacWorld, the iTunes Store has amassed over eight million podcast episodes.

As an alternative to radio shows, Apple in 2005 launched the then new Podcasts section on the iTunes Store alongside native support for podcasting on iPods. At first, iTunes used to host only audio podcasts though video content was added at a later stage.

Last June, the company put out a free Podcasts iOS app, but the move backfired.

Even though it has been refined through multiple iterations, the sub-par app continues to be criticized handsomely over its UI and limited features. In Apple’s defense, the company is expected to update its downloadable App Store apps such as Podcasts and Find My iPhone/Friends after iOS 7 gets released this Fall. 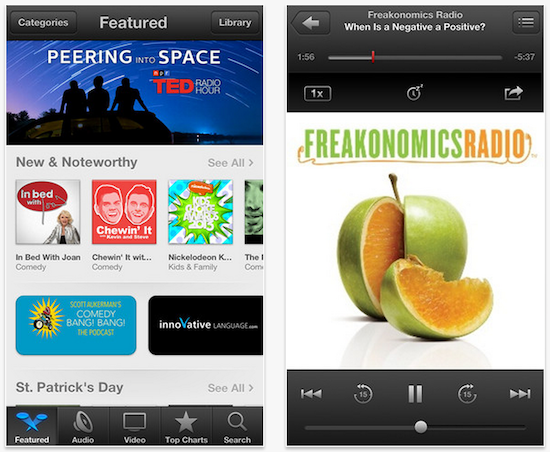 If you haven’t already, subscribe to Let’s Talk Jailbreak so you don’t miss your weekly dose of must-have jailbreak tweaks, top stories and hot topics making news headlines – all spiced up with a good humor and a care giving mindset.