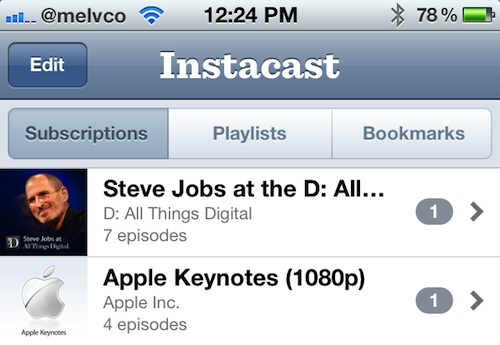 Instacast is by far and wide considered to be the best podcast client for iOS. It allows you to download and organize your favorite podcasts and video podcasts, without ever having to open iTunes.

Well it looks like the best just got better today. Instacast version 2.1 is out in the App Store, and the update includes a fresh coat of paint, and several other nice enhancements and bug fixes…

Now, we won’t go into the entire change log, but there are a few differences worth mentioning. First off, the interface has received some redesigns and performance boosts, making the app run much faster. There are also some cool new features like a “Delete Download after Played” option, and swipe to mark episodes as played/starred.

But the star feature of Instacast is still its ability to quickly browse, stream and download from the entire iTunes podcast library. Even if you don’t listen to conventional podcasts, you can find gems like past Apple keynotes (available in HD) and the full collection of Steve Jobs’ AllThingsD conference appearances with ease.

If you want to check out the new Instacast, it’s available in the App Store for $0.99. It’s worth noting that there is a $0.99 in-app purchase for Pro users, and a $4.99 iPad version. But not of the above-mentioned features are version-specific.

What do you think of the new Instacast?