The wireless provider industry here in the United States is dominated by 4 major carriers: Verizon, AT&T, Sprint and T-Mobile. You could actually narrow it down even further, to two carriers, as Verizon and AT&T are much larger than the other two.

In its latest advertisement, the Dallas-based carrier touts that it not only has the nation’s fastest network, but also “the most reliable.” It’s a bold claim, and the latest in a back-and-forth battle between the two wireless providers that has gone on for years. 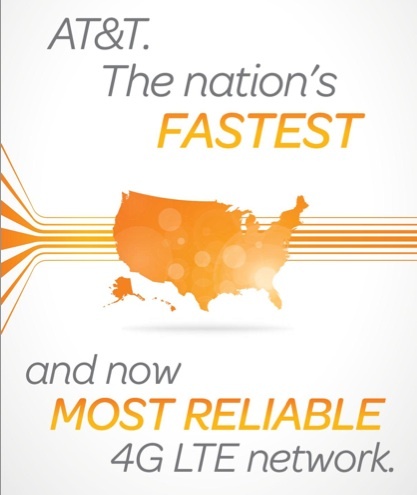 Remember back in 2009 when Verizon ran a series of holiday commercials with direct jabs at AT&T’s 3G coverage? That campaign actually led to a lawsuit by AT&T, who responded back with a series of TV spots starring Luke Wilson that countered the claims.

AT&T has long struggled with the poor image of its network reliable, dating back to when the iPhone launched back in 2007. Remember, for years, the popular handset was exclusive to the carrier, who found it difficult to support the hoard of data users.

But citing a recent independent study from a third party firm, which it has thus far declined to name, AT&T says that it now has the most reliable network in the country. Now, that’s limited to 4G LTE networks, which doesn’t include phone calls or text messages.

“It’s time to take another look at your wireless network. AT&T* not only has the nation’s fastest 4G LTE network, but now also has the most reliable 4G LTE network.** According to independent third-party data, AT&T has the highest success rate for delivering mobile content across nationwide 4G LTE networks.”

For what it’s worth, the latest data we have suggests that Verizon’s network is still the most reliable. Last month, PC Mag conducted an extensive study in which VZW came out on top. And the carrier still has the largest LTE network, in the most markets, by a lot.