It wasn’t long ago Apple was threatening to fire its retail employees over unauthorized use of iOS 7 betas. Now comes word the company seeks “pie in the sky” suggestions from store workers on ways to improve iPhone sales. The request came in a contest distributed last week, with the winning employees getting an eight-week trip to Apple’s Cupertino, California headquarters…

Do you have a great idea about iPhone? Do you have a thought about something that is missing in the store environment that would help bring iPhone to life?

We are looking for multiple candidates with the most innovative and relevant ideas to participate on this cross-functional team.

As part of this team Apple hopes to develop between August and October, retail employees below the manager level will “help solve problems related to how we support and sell iPhones in Apple Retail,” the company writes, via 9to5Mac.

Apple said it was looking for one page ideas completed during work hours – apparently so the ideas are seen as work-related and owned by the company. 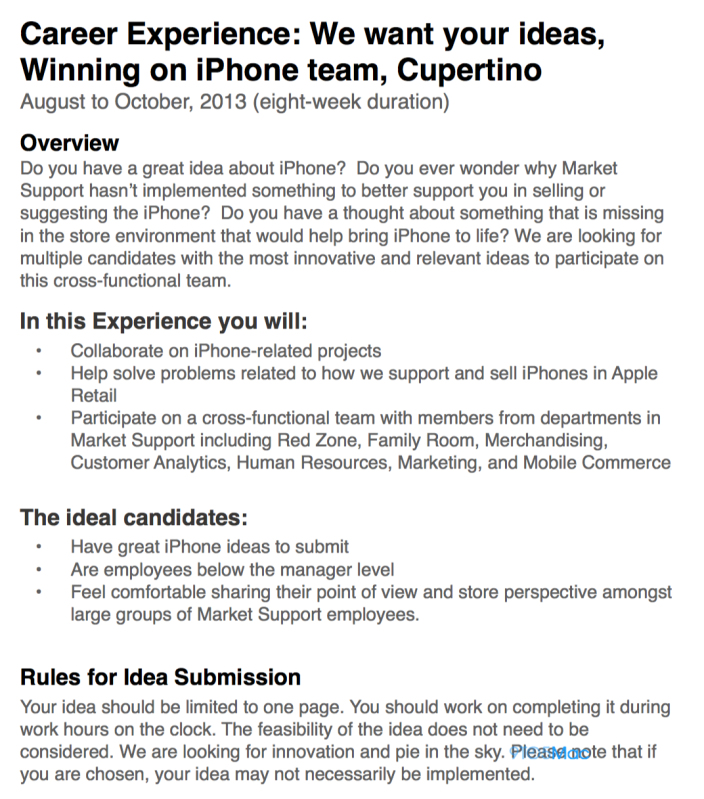 The iPhone maker added it is looking for both “innovation and pie in the sky” concepts without concern about feasibility. This isn’t the first time Apple has encouraged outside suggestions on products.

In June, the company asked Cupertino residents about their thoughts on iOS 7 and OS X Mavericks. Apple’s developer portal is also encouraging developers to provide feedback on beta products.