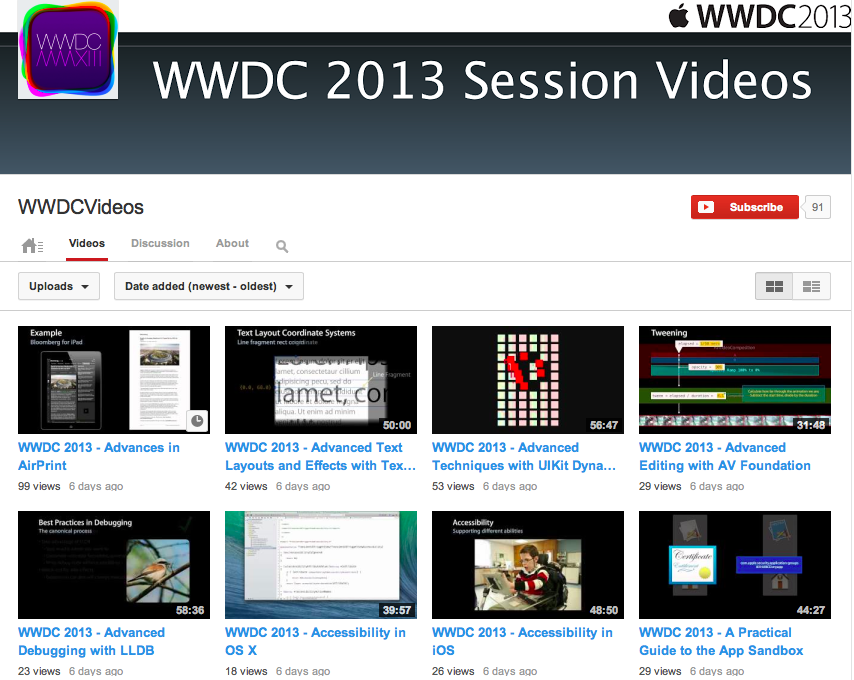 Apple’s registered developers who have downloaded an updated version of the official WWDC app have been able to stream this year’s session videos the day they were made. Developers can alternatively access an archive of WWDC 2013 session videos through both the app and Apple’s official portal for developers.

It looks like Apple has now published those clips on YouTube for everyone to watch, or so it seems. It was unclear at post time whether the iPhone maker actually operates a brand new account seemingly created for the purpose of hosting these NDA clips…

First tweeted by Safari and WebKit engineer Timothy Hatcher and reported on by MacStories, the WWDCVideos YouTube account contains a bunch of videos normally only available to Apple’s registered developers who paid a $99 a year membership.

The account was created on June 24 and all of the videos were uploaded six days ago.

The About section reads:

Get an in-depth look at what’s next in iOS and OS X, and learn how to take your apps to the next level.

With over 100 sessions, extensive hands-on labs, and engaging events, you’ll connect with Apple engineers and fellow developers for an incredible week of inspiration.

We doubt those clips would make it to YouTube unless uploaded by Apple. If Google has flagged them for copyright violation, it would take an action on Apple’s part to make infringing content unavailable.

The company notably has another official account where it regularly posts promotional videos, keynote clips, teasers and television commercials. We’ll update this post when we figure out the story behind WWDCVideos.

In the meantime, feel free to watch the videos and check out some of the new technologies and frameworks Apple is bringing to both iOS 7 and OS X Mavericks.