Quick, name the two hottest brands in the United States. If you picked Apple and Google you’d be wrong.

Although the iPhone maker and Android creator dominate the smartphone industry, the companies have dropped from the list of hot brand names.

By contrast, Amazon and YouTube made the current list of the top 10 hottest US brands for mid-year 2013. In another surprise, basement-dwelling BlackBerry was named the most-improved technology brand – thanks to the new Z10…

According to YouGov’s Brand Index for the January-June period, Amazon’s Kindle helped online retail giant Amazon make it onto the overall 2013 list twice: once for its online retailing (No. 2) and again for its e-reader (No. 9).

Offering the Kindle Fire HD, as well as reviving the Kindle DX “means Amazon has kept the brand’s reputation for high value and maximum choice,” according to YouGov. The Amazon brand is particularly strong among parents with children younger than 18, singles age 18-34 and Democrats, the survey explains.

Additionally, the Kindle brand itself deserved ranking because the Kindle Fire HD remains the “best-selling e-reader in the US.” It didn’t hurt that when Amazon introduced its Amazon Coins to use at the Kindle App Store, all US Kindle Fire owners received $5 worth of Amazon Coins free.

Google’s video sharing website YouTube is listed as the No. 8 most-known US brand. Its position among the top 10 brands is due both to the service’s support of same-sex relationships, as well as becoming a go-to site for videos in the headlines.

Besides Amazon and YouTube, US automaker Ford was named the No. 1 brand, followed by the Subway sandwich chain at No. 3, the History channel at No. 4 and the Lowe’s home improvement chain at number five. 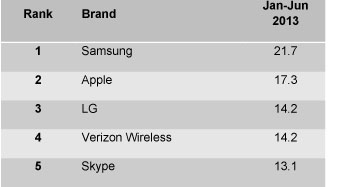 When it came to the tech industry, South Korean Samsung topped the list, Apple placed No. 2, LG ranked third with Verizon Wireless and Skype rounding out the top five.

The Waterloo, Canada-based BlackBerry doesn’t receive that many awards. Tepid sales marked by lackluster attempts at challenging the iPhone have left consumers confused and Wall Street worried about whether the smartphone maker can survive.

Rounding out the list of best improved brand is Time Warner Cable. The cable provider registered -1.5, essentially advancing to the basement from its previous sub-basement ranking of -4.6.