AT&T, the second largest wireless provider in the United States by customer base, started sending out invitations yesterday to several major media outlets for a mysterious media event it’s going to be hosting on July 16.

Other than the cryptic message “Get ready for what’s next in wireless,” the invites don’t really offer up any details on what the event could be about. But given that AT&T is a carrier, it’s not hard to speculate on the matter…

Unless it’s been working on a super secret smartphone or tablet, it’s safe to assume AT&T’s event has something to do with its network. And that theory is corroborated by the various stats it lists on the teaser (via Phonedog). 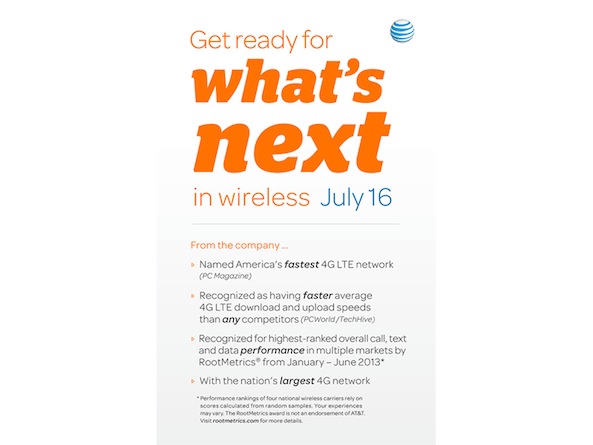 So what could this network announcement be? If I were a betting man, I’d say it has something to do with LTE-Advanced—a next-gen mobile communication standard that is garnering support from carriers and handset-makers.

AT&T has said that it plans to start rolling out LTE-Advanced support in the 2nd half of 2013, which we just entered into. So as you can imagine, we wouldn’t be at all surprised if its launch was one of the main focuses of the event.

It’s also possible that the carrier could talk about HD Voice (or wideband audio). The technology, which is supported in the iPhone 5, enables crisper audio during voice calls. And AT&T is expected roll that out later this year as well.

At any rate, the event takes place next Tuesday. And as usual, we’ll be following along and reporting back on all major announcements. So make sure to tune in.

What do you think the event is going to be about?