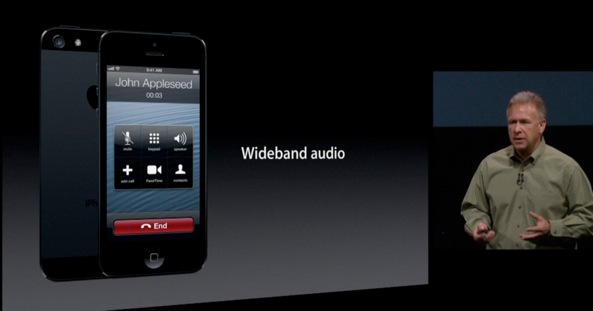 Last week, T-Mobile announced that it was finally going to start offering the iPhone. It will be selling all current models, with the iPhone 5 starting at just $99 down, and will support the handset’s HD Voice (or Wideband Audio) feature.

In fact, once it launches the iPhone 5 later this month, T-Mobile will be the only US carrier to support its HD Voice option. But it won’t be that way for long. AT&T announced today that it will be rolling out support for the tech later this year…

“Speaking on Monday, AT&T senior VP Kris Rinne said that the carrier will roll-out its own support for the technology later this year as it begins to route voice calling over its LTE network.

“HD Voice is part of our voice over LTE strategy,” Rinne said, speaking at th VentureBeat Mobile Summit in Sausalito, Calif. Sprint has also talked about its plans for HD Voice.”

HD Voice, for those unfamiliar with the technology, extends the frequency range of audio signals transmitted over telephone lines, resulting in higher quality speech. It requires support from both the carrier and the devices on each end of the call.

Apple announced support for the tech in passing during its big iPhone 5 event last September. At launch, the feature was only supported by 20 carriers around the globe (none of which were in the US), and it hasn’t gained much traction since.

But as an AT&T customer, I can’t wait for it to start offering HD Voice. I’ve never heard it in action, and I don’t really have a problem with my current call quality, but I imagine it’s like HDTV—once you’ve tried it, you can’t go back to anything else.

Are you excited to see carriers starting to add support for HD Voice? Or do you see it as more of a gimmick?