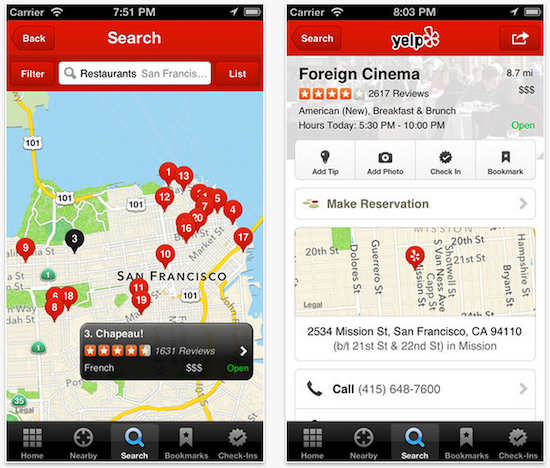 Popular rating and review service Yelp has posted an update for its iOS application today, bringing the app to version 6.9.1. The update only really includes one new notable feature, but it’s a big one: the ability to order food without leaving the app.

That’s right, in the new version of Yelp, you can actually order food for pickup or delivery—provided the option is available. So if you’re browsing the app, and come across a restaurant review that makes your mouth water, you can order it instantly…

The move is apparently the first of many by Yelp in a project it’s calling ‘Yelp Platform,’ which is an effort to bring in a host of in-app transactions that will allow users to pay money for goods/services. Here’s the announcement from the company blog:

“We’ll be rolling out Yelp Platform category by category, beginning today with food delivery and pickup. Starting now, people can order food directly from a select number of restaurants supported by delivery.com and Eat24, like NYC’s Harry’s Italian Pizza Bar and Layaly Mediterranean Grill in SF. Eventually, consumers will be able to order whatever meal they’re craving for delivery or pickup at thousands of local restaurants across the US, directly from those businesses’ Yelp listings.”

In the coming months, Yelp says it plans to add other categories like spas, yoga studios, salons and dentist appointments, starting with Booker, Intuit’s Demandforce and MindBody. This will make it easier for users to book appointments and such.

I have to say that I believe this is a great move by Yelp. I do all kinds of research on the site when trying to find a new local dentist or Dr.’s office, and would love to be able to just book an appointment right there in the same window. I can’t wait to try it out.

Another interesting dynamic to today’s announcement is that Yelp is actually pretty heavily integrated with Apple’s Maps app and even Siri. So I imagine that the benefits of this new Yelp Platform will eventually make their way to those two elements.

At any rate, if you want to check out the new Yelp app, you can find it in the App Store for free. Keep in mind that the ability to order food will be extremely limited at first, but more options should become available in the coming weeks and months.