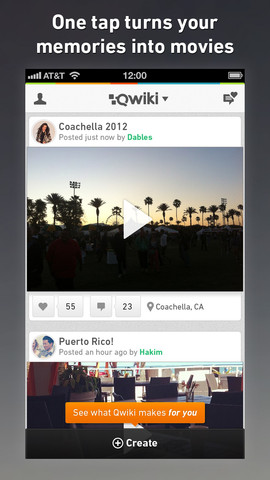 There’s no stopping Yahoo lately. The ink hasn’t dried yet on the Internet giant’s $1.1 billion acquisition of the world’s #2 blogging platform Tumblr and today Marissa Mayer & Co. have acquired another startup. This time around, Yahoo set its sights on Qwiki, a NYC-based startup behind an iPhone app of the same name.

Qwiki launched in alpha testing mode on January 24, 2011 after winning the TechCrunch Disrupt Award in 2010. The ingenious iPhone software turns images and videos from your Camera roll and turns them into short and beautiful movies. Apple named Qwiki its Search and Reference application of 2011 and it received Apple’s Editor’s Choice.

The news was confirmed in blog posts by both Yahoo and Qwiki.

“The Qwiki app will live on as a standalone entity inside Yahoo!, where we will grow our thriving community and where our team will continue to work to help you share life’s best experiences,” Qwiki co-founder Doug Imbruce wrote.

Have you ever listened to an old song and all of a sudden a favorite vacation, concert, or summer memory pops into your mind?

The Qwiki app automatically turns pictures and videos that you already have on your iPhone into quick, beautiful movies to share, including transitions and a soundtrack.

It’s interesting that the co-founders of Qwiki Inc. are Doug Imbruce and Louis Monier, who also founded AltaVista, the Internet’s original search engine its owner Yahoo plans to shut down on July 8.

In case you’ve been wondering, the free Qwiki for iPhone app was available for download on the App Store at the time of this writing.

I highly recommend giving Qwiki a try, you most certainly won’t regret it.