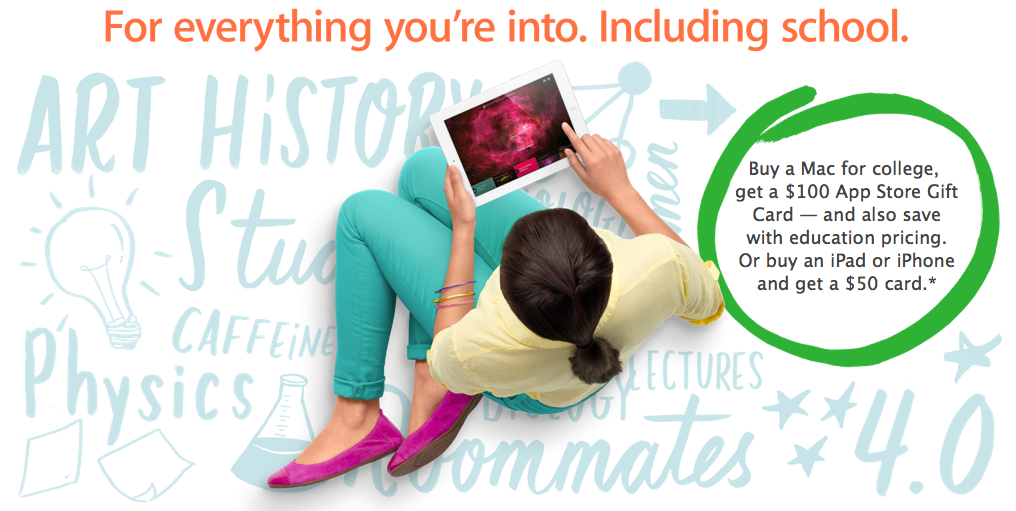 As expected, Apple today launched this year’s Back to School promotion which gives university students or their parents a chance to buy qualifying Mac, iPhone and iPad products and accessories and get an iTunes Gift card. If you buy a Mac, Apple will treat you to a $100 App Store Gift Card.

Buy an iPad or iPhone and Apple will throw in a $50 Gift Card. You can redeem your card against any content purchase on iTunes, including Mac and iOS apps, movies, television shows, songs, books and more.

Full details are right below the fold…

According to the promotion terms and conditions on Apple’s website, you must be a college student, a student accepted to a college, a parent buying for a college student or a faculty or staff member from any grade level to qualify for this promotion.

These products are available through the Apple Store for Education.

For instance, the Mac mini is excluded from the promotion. As for iDevices, iPad 2, iPad mini, fourth-generation iPad and iPhone 4/4S/5 are all eligible.

By the way, this is the first time Apple included iPhones in Back to School promo.

The Back to School program is available starting today and through September 6 in the following markets: Austria, Belgium, Canada, Denmark, Finland, France, Germany, Ireland, Italy, Netherlands, Norway, Spain, Sweden, Switzerland, the United Kingdom and of course the United States.

The promotion is available at Apple’s online and brick-and-mortar stores and via Authorized Apple Campus Stores for the Mac and iPad and through the retail and online Apple stores for the iPhone.

Back in January, Apple kicked off 2013 Back to School in Australia and New Zealand.