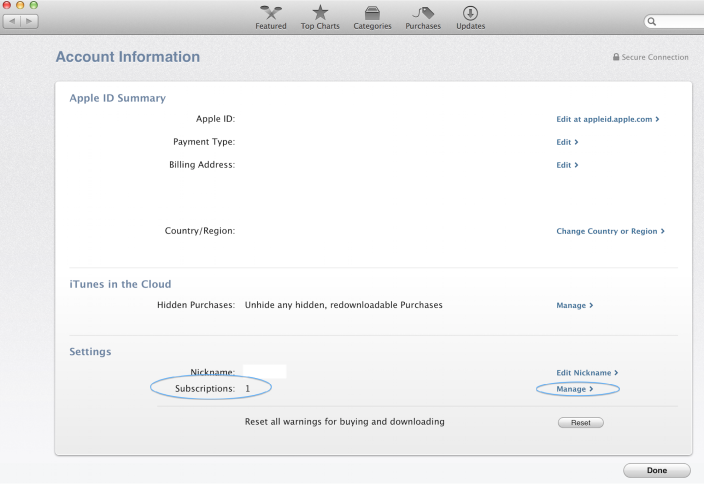 Apple with the iOS 5 release on September 19, 2012 brought in-app subscriptions to its mobile operating system. The feature was originally conceived to allow for the creation of subscription-based digital magazines and newspapers sold on the iOS Newsstand, along with enabling app-managed content offered on a subscription-basis. And now, subscriptions will be definitely coming to Mac apps carried on the Mac App Store when OS X Mavericks is released this Fall…

Jordan Kahn of 9to5Mac made the discovery by firing up the Mac App Store storefront in OS X Mavericks to discover a new Subscriptions field that’s nowhere to be found in the current Mac App Store build on OS X Mountain Lion.

Both renewing and non-renewing subscriptions will make their way to OS X Mavericks:

With new auto-renewable and non-renewing subscriptions, Apple will make it easy for any Mac app developer to offer subscriptions that automatically renew after a certain period of time and charge a user’s Apple’s ID.

The lesser used non-renewing subscriptions, also coming to Mavericks, are used for other types of subscriptions with the terms of the content managed directly by the app.

You’ll manage these in the Mavericks under the Mac App Store’s Settings panel.

It’s going to be especially handy when using cross-platform iOS/OS X apps such as Evernote or Wunderlist as you’ll be able to enable a subscription from any device.

And with OS X subscriptions now in place and given Apple’s introduction of the iBooks Mac app at WWDC last month, we suspect Newsstand could be making its way to the Mac at some point in the future.

No matter how you look at it, this development bodes well for developers and the app economy at large.

Mac developers are now free to take advantage of in-app subscriptions to give users access to paid digital periodicals and other types of managed content, like movies, television shows and more.

Apple is also making it easier for iOS developers to reduce the size of initial downloads by hosting free in-app purchases that can be optionally downloaded to add new content.

For example, a movie editing app could offer free downloadable project templates. Apple is limiting the size of free downloads to two gigabytes per in-app purchase and is hosting these things on iTunes servers.