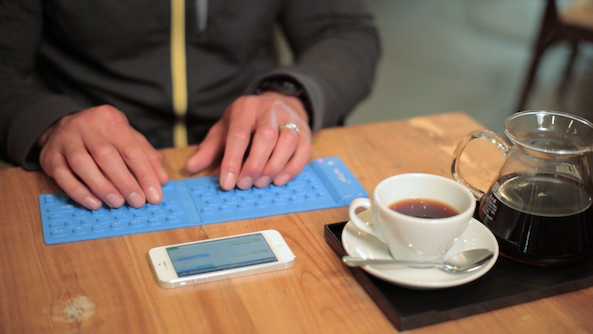 When Apple introduced the first iPhone back in 2007, it sparked a revolution in the smartphone industry: no more physical keyboards. Think about it, outside of BlackBerry and a few scattered Android handsets, who is still making smartphones with physical keyboards? No one, really.

And I don’t personally mind it. It took some getting used to, but I’ve gotten pretty quick at typing on the iPhone’s touchscreen. But for those who haven’t quite picked it up yet, there are plenty of accessories available to help you out— like this new myType Bluetooth keyboard… The myType keyboard is a new wireless keyboard for your iPhone, iPad or virtually any other mobile device with built-in Bluetooth. It’s major selling point is its size—measuring in at just 6.8″ x 3.6″ x .35″ when closed, and made of a thin and flexible material, it’s supposedly pocketable.

But its feature list doesn’t end with “it’s really small.” The keyboard is also splash resistant, durable and has a built-in Lithium Ion battery that the devs say lasts for “weeks of normal use.” And that’s surprising, considering it uses Bluetooth 3.0 tech and not the low-powered 4.0.

Unfortunately, the myType isn’t quite available for purchase yet. The developers have working prototypes, but they’ve taken to Kickstarter to raise money to start production. They’re almost there though, with over $6,600 of their $10,000 goal in the bag and more than 34 days left to go.

If you’re interested, a pledge of $49 or more gets you a keyboard in your choice of Kickstarter green, black, white, blue or pink. Shipping to the U.S. is free and is expected to start in October. That’s pretty ambitious considering the funding doesn’t end until August, but they could pull it off.

I’m not quite sure what to make of the myType just yet. It seems like a nice idea and all, but honestly, I’ve had similar keyboards in the past that I just never got any use out of. I guess I’ll have to reserve my judgement until it’s released this fall and we’re able to try it out first hand.

What do you think of the myType?