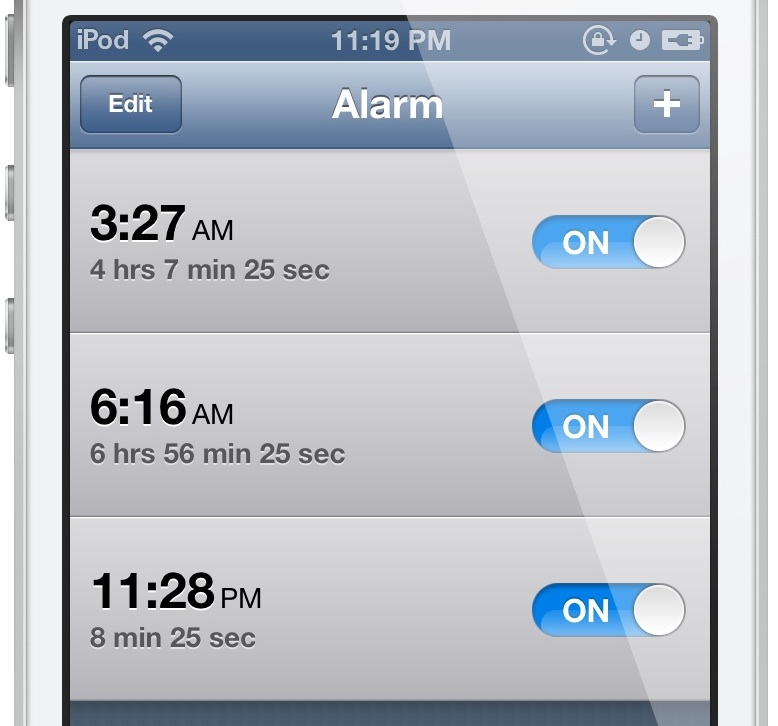 TimeForAlarm is a recently released jailbreak tweak, and it provides you with a readout of the remaining amount of time before your alarm is scheduled to sound. The tweak, which is free on Cydia’s ModMyi repo, displays a real time readout of the time remaining for all of your configured alarms in the stock Clock app.

TimeForAlarm features a preference panel in the stock Settings app, and it includes a switch to disable the seconds countdown. Doing this will cause the time to refresh every minute instead of every second, which in turn, lends stability to the tweak. I noticed that with the seconds enabled, the tweak was a bit on the glitchy side when it came to the countdown timer readout. Hence, I recommend that you keep the seconds featured disabled when using TimeForAlarm.

TimeForAlarm is a tweak that provides you with greater context as to when your alarm clock will sound. It makes it so that you no longer have to calculate in your head how many hours you have left to sleep.

If you’ve yet to use iOS 7, then you’ll be happy to know that such a feature exists in iOS 7, but in my opinion, it’s much better implemented. On iOS 7, the countdown timer displays on your Lock screen, which is much more useful than simply displaying within the Clock app. Hopefully TimeForAlarm will adopt such a feature.