For years, the media has been keen to compare companies based on their market capitalization. The metric itself is pretty fluke, but it makes for nice headlines – especially if the topic of reporting is Apple. Earlier this year, for example, much noise was made about Apple passing the oil giant ExxonMobil to become the world’s most valuable corporation by market capitalization.

Having said that, it really shouldn’t be surprising big media is now reporting that the Internet giant Google recently “passed” Apple to become the world’s most valuable technology corporation. The bold claim comes with a caveat: you have to stretch your definition of market cap and strip out some key metrics…

Market cap as the total value of the issued shares of a publicly traded company equals to the share price times the number of shares outstanding. Investors typically bake a company’s future performance expectations into its share price.

As a result, billions of dollars in market cap get wiped out literally overnight because investors are becoming increasingly fickle these days, their preferences changing faster and faster.

A good example is Samsung, whose market cap dropped by $12 billion after investors figured their Galaxy sales projections were overly optimistic.

Another factor investors calculate into the share price: cash reserves.

But what if you took that important asset away? Removing money in the bank from a company’s market cap leaves you with so-called underlying value.

So, deducting Apple’s $145 billion of net cash (as of March) and Google’s $45 billion from its market cap leaves us with an enterprise value of $233 billion for Apple and $241 billion for Google. 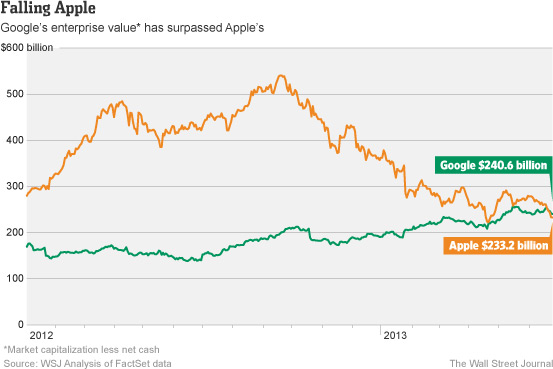 The number reflects the “underlying value of the companies’ actual operations”, per the Journal. I’m not sure how disregarding Apple’s or Google’s pile of cash makes sense: the money in the bank came from sales and is therefore treated as a valuable asset.

If we are to exclude bank accounts, we could just as easily strip out the value of a company’s intellectual property, or unsold inventory or licensing revenue.

Be that as it may, it certainly did serve the Journal’s headline “Big Apple, Bigger Google”, followed by the lead paragraph saying “Google has passed Apple as the most valuable technology company in the world—on one measure”.