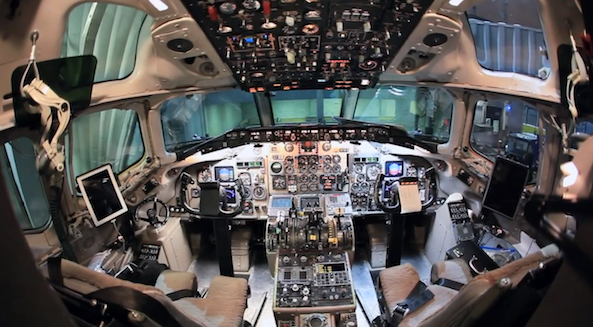 American Airlines is now using Apple’s iPad in all its flights, the tablet replacing millions of pages and pounds of documents pilots previously had to carry into the cockpit. In a Monday announcement, the airline said switching to the tablet will save the company more than $1 million in fuel costs every year.

American pilots flying the Boeing 777, 767, 757, 737 as well as the MD-80 will use the iPads equipped with the Jeppesen Mobile Terminal Chart app for controlling gate-to-gate flight controls. The announcement follows American becoming in 2012 the first airline to receive FAA approval for tablets in the cockpit…

“Our electronic flight bag program has a significant positive environmental and cost-savings impact,” said David Campbell, vice president of Safety and Operations Performance at the carrier.

“We are proud to count this among our other successful programs that provide the tools our people need to perform their duties safely and efficiently,” said Patrick O’Keeffe, American Airlines’ Vice President of Airline Operations Technology, in a news release.

The release mentions that American Eagle will become the first regional airline to adopt the iPad flight bags starting July 10.

The more than 8,000 iPad used in the carrier’s cockpits translates into removing 24 million pages of documentation, or 35 pounds per plane. By moving the usual assortment of charts, diagrams and pilot instructions found in the company’s normal pilot flight bag, 400,000 gallons of gas will be saved, according to American.

Along with $1.2 million in reduced fuel costs, the move may also save the backs of the cockpit crew.

While more and more airlines join American by adopting tablets for the crew of passenger airlines, the FAA has yet to announce whether it will revise its rules regarding passenger use of electronic devices during flights.