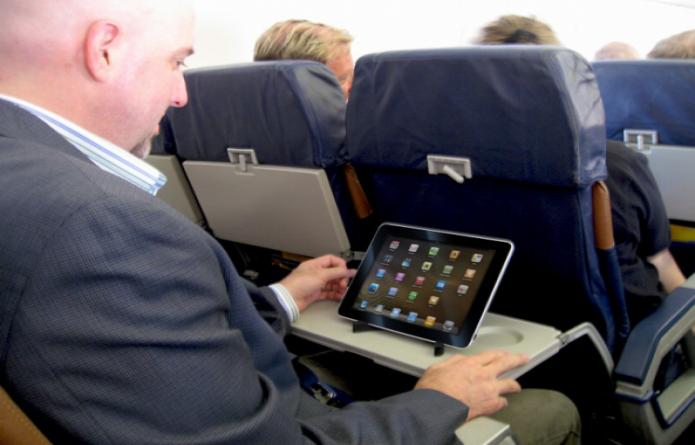 Good news air travelers, you may soon have to quit pretending to turn your iPads and other electronics devices off before takeoff. According to a new report from The Wall Street Journal, the FAA is expected to relax the ban on using some types of personal electronic devices at low altitudes.

Devices like iPads, e-readers and other tablets may see the rules relaxed to the point where they are usable throughout your entire flight—from takeoff to landing. However, cell phones, and more specifically cell phone calls, are expected to remain off limits due to the scope of the changes…

The Journal’s Andy Pasztor has the scoop:

“Airline passengers irritated at having to turn off their devices could soon see some reprieve, with regulators set to allow wider use of gadgets in flight.

The Federal Aviation Administration is expected to relax the ban on using some types of personal-electronic devices at low altitudes, allowing passengers leeway during taxiing and even takeoffs and landings, according to industry officials and draft recommendations prepared by a high-level advisory panel to the agency.”

As it stands now, the FAA gives airlines leeway to independently evaluate the safety of specific devices to either allow them to remain on, or see that they’re turned off before takeoff. But it’s become par for the course for airlines to prohibit the use of all devices until planes reach 10,000 feet.

Honestly, we’ve been hearing about ‘supposed changes’ being made to these rules for a long time. So I’m at the point where I’ll believe it when I see it. But a few months ago, the FAA tasked a commission with doing in-depth research on the topic, and their findings fully support new guidelines.

“The FAA may be forced to act due to the sheer number of passengers flouting today’s rules. The experts who wrote the draft referred to recent industry research showing that nearly one-third of passengers reported that, at least once, they accidentally left some device on throughout a flight.

Unless the FAA eases its standards, the advisory group frets that “confidence in the FAA and the [industry’s] ability” to integrate personal electronic device usage will erode, and a “nonstandard system” of patchwork rules adopted by individual airlines “could emerge that further confuses the public.”

So where do things go from here? Well the group’s findings are expected to bolster arguments of lawmakers and safety experts who continue to assert that a vast majority of today’s portable devices pose little or no risk of interfering with aircraft systems. So if nothing else, it should speed things up.

Unfortunately, the Journal says that the FAA won’t likely make a formal decision on the matter until after it receives the final version of the advisory panel’s study, which isn’t due until the end of September.