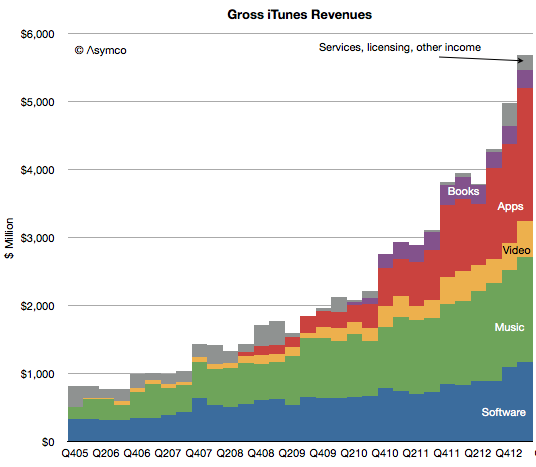 Apple’s iTunes is one of those happy ironies. Begun as a way to boost sales of Macs and other hardware and content with breaking even, the service now rakes in $20 billion per year selling digital warez such as video, books, apps and music – a whole lot of music. In fact, Apple now sells 75 percent of all digital music, according to a new analysis.

In a series of peeks into how iTunes earns all that revenue, independent analyst Horace Dediu paints a picture where more than a half-billion users are pointing to a future where apps surpass digital music sales…

When Apple announced Thursday the addition of HBO and ESPN to its Apple TV lineup, the usually tight-lipped firm provided a detailed picture of what’s selling on iTunes. The highlight: Apple controls $6.9 billion of the $9.3 billion spent annually on digital music, Dediu pointed out.

While this explains why music labels want an Apple competitor in this sector, another number shows why Apple wants its own streaming music business.

Focus on those last two numbers.

In 2007, iTunes users were spending triple what they do on digital music. 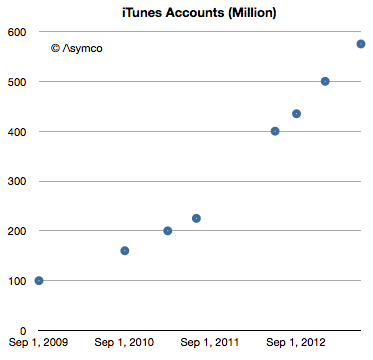 Likewise, apps have increasingly become a larger revenue-generator for Apple.

Why is per-user iTunes purchases of digital music falling?

While in the beginning, anyone wanting digital music had to go to iTunes (remember all the failed attempts to compete?), now there are several streaming-music options, where you can listen to tunes without having to buy an album from Apple.

This explains why the iPod maker is so hot on the idea of introducing its own streaming-music service, iRadio, later this year.

Can Apple prevent the escape of more digital music revenue, or is the spending shift towards apps a done deal?

Whatever the outcome, iTunes will never return to its roots as just a way to sell more hardware – it is now a massive high-revenue, low-margin business on its own.