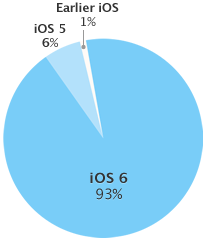 Apple has started charting the iOS adoption figures via a portal for its registered developers. While Google’s been doing this for quite some time now, it’s the first time Apple offered the continuously updated official iOS adoption data.

Key takeaway: a whopping 96 percent of Apple customers are now using iOS 6, as measured by the App Store during a 14-day period ending June 3, 2013.

There is a massive difference compared to Android 4.x versions that, according to Google’s dashboard web page, was on 58.6 percent of Android devices accessing the Android Play store during a 14-day period ending on June 3, 2013.

And with 39.8 percent of Google customers on the now outdated Android 2.2 Froyo and up to Android 3.2 Honeycomb software, Apple’s huge advantage in terms of platform fragmentation is undisputed…

Apple previously showed this chart to WWDC attendees, with engineers and executives not shying away from privately highlighting throughout WWDC sessions Apple’s key fragmentation advantage versus Google.

By the way, Apple is demanding that new apps and app updates be built for iOS devices with Retina display. Another requirement: iPhone apps must also support the four-inch display on the iPhone 5.

It should be noted that Google measures only devices which access the Play store, excluding forked Android versions such as Amazon’s Kindle tablets and a plethora of basic devices from no-name Chinese vendors. 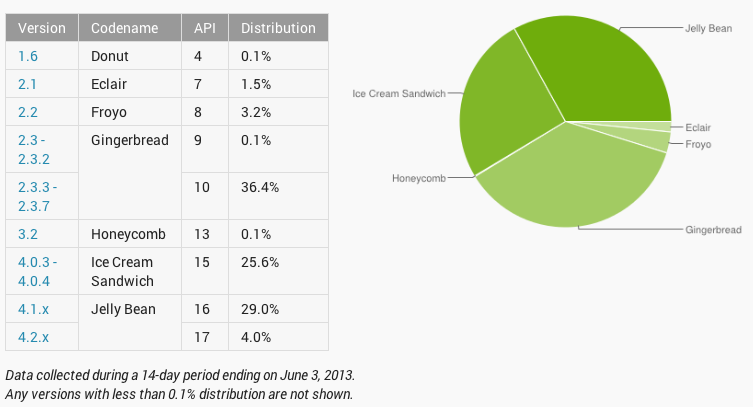 Just like Google, Apple’s numbers are based on the App Store logs. Because Apple exclusively makes iOS devices and given it doesn’t allow third-party stores, Apple’s stats are an accurate representative of the market.

Some of the stats Tim Cook mentioned during the WWDC keynote are rather impressive. Despite Android’s market share and unit sales lead stemming from the fact that anyone can take Android for free to build devices, the App Store has a clear revenue advantage.

The App Store, which next month turns five, has earned developers an astounding ten billion dollars thus far, which is more than all other platforms combined.

Apple now has 575 million iTunes accounts, most of them with credit cards enabled for one-click shopping. The App Store has amassed 50 billion app downloads (excluding re-downloads and updates) and is home to 900,000 apps, with more than 375,000 programs specifically designed for iPads.

Last, but not the least, cumulative sales of iOS devices have crossed the 600 million units threshold. Taking a moment to crunch those numbers, it isn’t terribly surprising six million developers signed up to write iOS apps.