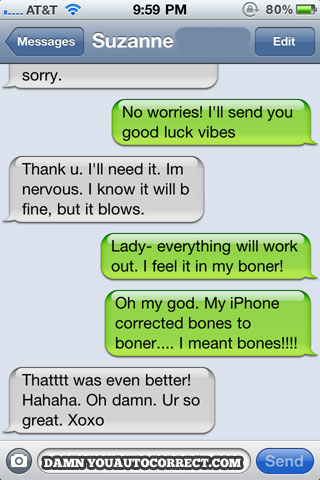 I’d be lying if I said I’ve never been embarrassed by a text message I sent containing an accidentally auto-corrected word. I’m sure you’ve been there too. It can be embarrassing, or it can be hilarious, depending who’s receiving the message and what’s being said, but at the end of the day, it’s something that could have been prevented should your iPhone auto-correct be a little smarter.

And smarter it appears to be in iOS 7! Christian touched on this earlier today with a post on how the keyboard features in iOS 7 have gotten smarter, but I’d like to focus a little more on auto-correct with a few real life examples and comparison points with iOS 6…

What auto-correct can do on iOS 6

Up until now, iOS 6 has only been able to correct the last word you typed. In certain instances, it could fix the second to last word, but only when this word was in an iOS database of proper nouns. For example, iOS would fix “united states” to “United States.” But again, it’s only because United States is in a database of proper nouns stored in iOS.

In the same way, iOS can tap into your Contacts for correct spelling of names of people that are in your Contacts. It can also look at the Shortcuts you have added in the Keyboard settings, inside the Settings app, and maybe even better, it can learn from you as you “teach” iOS to spell words correctly, which you do every time you decline the same auto-correction several times.

Finally, iOS has always been able to fix words that have accidentally been tied together. For example, typing “thisis” would be auto-corrected to “this is.”

What iOS hasn’t been able to do until iOS 7 is to backtrack and fix a word that it had already auto-corrected. If you’re wondering what the he’ll I’m talking about, check out these few examples below.

Below is a series of screenshots I took typing the same phrases in the Mail app on iOS 6 and iOS 7. 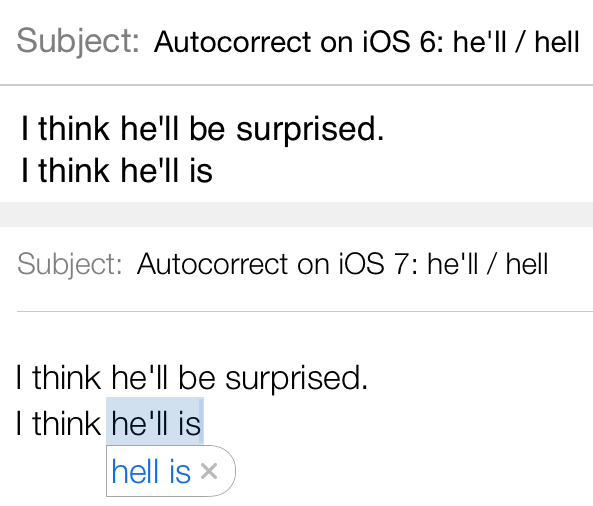 Your iPhone (or other iOS device) has always been smart enough to tell that when you type “hell”, you probably mean to type the more often used “he’ll,” so it would automatically auto-correct to the right words, which is a good thing in most cases. But what happens when you actually want to type hell? In iOS 6 and below, you had to manually tap the suggested auto-correct box to cancel it.

In iOS 7, auto-correct will default to “he’ll” too, but once you type in another word, the operating system is now capable of figuring out some of the context and decide whether you actually mean he’ll or hell. 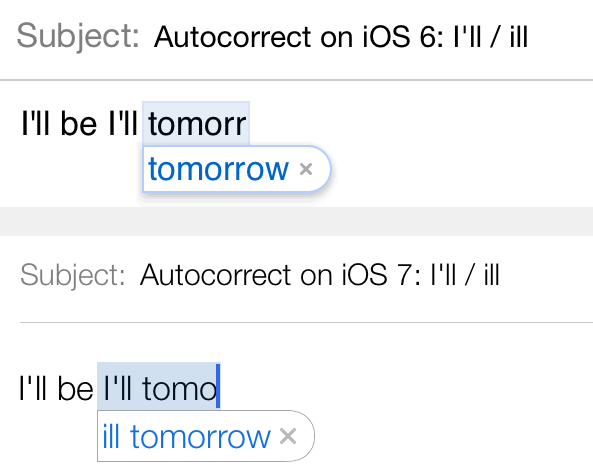 The same happens with something you and I probably type more often than not: I’ll, as in I will. When I type I’ll on my iPhone, I usually don’t bother typing the apostrophe because I know iOS will auto-correct it for me. But if you want to type the word “ill,” then you have to go out of your way to cancel the auto-correct by tapping on the suggested correction.

Once again, iOS 7 is smart enough to know when you mean I’ll or ill. In the example above, iOS 7 first auto-corrects ill to I’ll, but then, based on what’s following, it knows its suggestion was wrong and offers a new one that is actually correct. 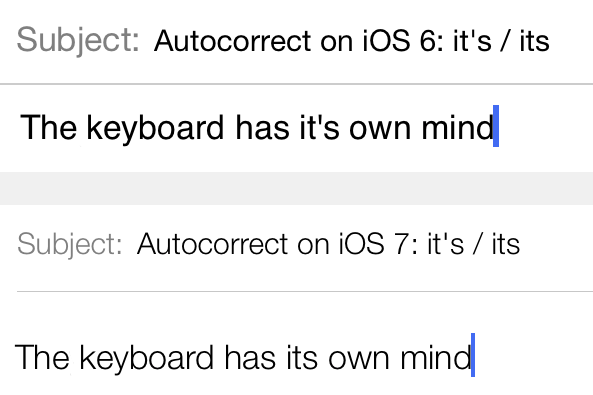 We could probably go all day pointing out auto-correct mistakes, but there are a couple more that I think many people encounter, so I want to use them to illustrate this post. 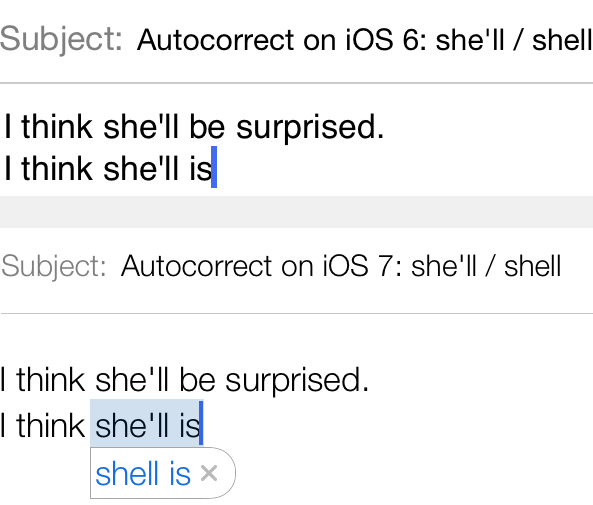 Here is another one that I use a lot. I know iOS 6 will auto-correct “shell” to “she’ll”, so I never bother adding the apostrophe myself. I just let iOS do it for me with auto-correct. But sometimes (rarely), I want to actually use the word shell. While iOS 6 can’t see the difference between both, iOS 7 can, and although it first auto-correct to she’ll, it quickly backtracks when it figures out it’s grammatically incorrect. It then offers the right word, which in this case is shell. 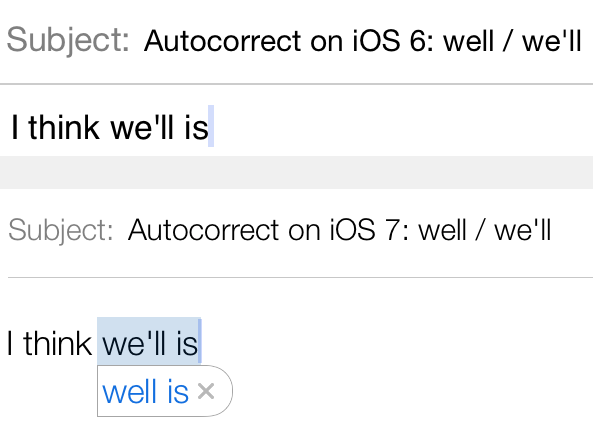 One last example. Just like I never type the apostrophe in “she’ll,” I never type it in “we’ll” either because I know iOS will fix it for me. Once again though, if you actually mean “well,” as soon as you type another word, iOS 7 will look back and see that its auto-correction was wrong and will offer to fix it for you.

Auto-correct is definitely a work in progress and it has plenty of room to grow. I’m glad to see Apple is working on improving auto-correct, a feature used by the millions of people who own an iOS device, most of them not even aware of the auto-correct capabilities. In most cases, auto-correct works just fine on iOS 6, but it obviously got even smarter on iOS 7.

What’s probably most interesting is that auto-correct is now capable of backtracking to fix the second to last word. Could this open the door to an even broader check of previously typed words? Surely, this could bring proper Pattern Matching to iOS, something smart enough to analyze a full sentence and be able to tell if there are grammatical errors. Of course, at this point, iOS probably lacks the computing power and most importantly the internal databases to check text against patterns, but something tells me it’s only a matter of time.