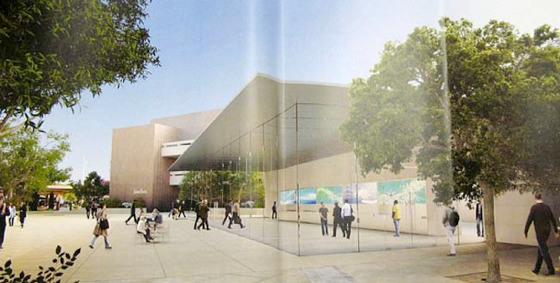 While most Apple retail locations which grab headlines are in China or New York City, the iPhone maker is working hard to finish work on its flagship store in Palo Alto, California. Unlike other huge glass Apple flagship stores, this one is most known for overwhelming a nearby Microsoft store built just last year to out-do Apple.

Aside from the one-upsmanship between the two rivals, the 12,000-square feet store in the city’s Stanford shopping center expected to open in November may have been one of the last decisions made by Apple co-founder Steve Jobs. According to a report Monday, Jobs approved the store’s design just six months before Tim Cook became CEO…

The larger Apple store is being built right beside a smaller Apple retail site.

In the spring of 2012, Microsoft opened its own flagship store, right next to that earlier Apple location – complete with a free Maroon 5 concert.

Although the Apple store is far from complete, TechCrunch explains that:

It’s a massive space and the glass facade will be a striking architectural accomplishment that makes the store stand out even with impressive neighbors.

The Stanford Shopping Center Apple stores are unique in other ways.

According to the report, Apple often used the site (along with a similar store at Palo Alto’s University Avenue) to test retail products.

In one instance, Apple tested its self-checkout feature, allowing customers to use an iPod touch to find iDevices and then check out with little intervention.