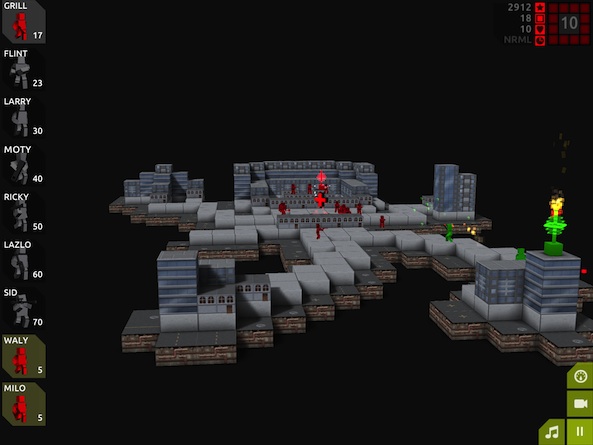 Every week, Apple spotlights a couple of new or recently updated apps that they believe stand out amongst the sea of submissions to the App Store. The Editor’s Choice is usually given to an app or game that looks especially cool, incorporates iOS technology well, or is otherwise innovative in its field.

Cubemen2 received the Editor’s Choice moniker this week for its combination of real-time strategy and tower defense gaming. It is full of customizable playing fields, multiplayer battle action, and more…

While at first glance, the app appears to have a very simple design, it is actually more feature rich than you would imagine. The basic game consists of solid-colored game pieces and gray blocks. But with a bit of customizing, you can turn simple graphics into a pixelated paradise.

There are 10 different character-customizing options that you can use for free. For example, you can dress you Cubemen like cowboys or lumberjacks. You can also purchase fancier costumes like clowns and zombies for $0.99 each.

You can change the way each playing field looks with five different free level themes, including a volcano or city street. For an additional $0.99 each, you can turn your monochrome landscape into snow-capped mountains, medieval castles, and other fun themes.

You can also change the color of your and your enemy’s Cubemen to nine different hues. So, you can really mix up your options.

When you start a game, you can either select single-player mode based on defense or offense, or select multiplayer mode based on skirmishes, Capture the Flag, or territory ownership. You can adjust the game play in the Advanced options of each level to change the difficulty, number of waves, length of gameplay, and even whether you play against artificial intelligence “Bots” or real life opponents. 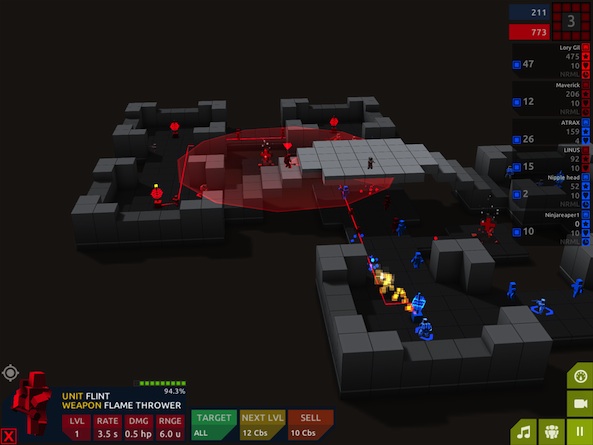 When you play the game for the first time, it is a good idea to play the tutorial. This will explain how to get your men in position to defend the tower, or to attack the enemy on their ground.

In single player mode, players choose to either defend their base or rescue Cubemen from the enemy’s base. The action takes place in waves. You have a few seconds to launch as many men as you can afford. You earn cubes, which are used to buy more Cubemen when you destroy the enemy.

As is typical with tower defense games, your troopers’ costs are based on their abilities. The more destruction a soldier can cause, the more expensive he is to launch.

When you’ve earned enough cubes, pick a soldier to launch. Grill is a basic shooter with fast reflexes and low health. Flint is a flamethrower. Larry shoots ice lightning that slows enemies down. Each Cubeman can be upgraded to be more powerful or destructive. Sometimes, it is smarter to upgrade a Cubeman than to launch new ones. The upgrades are less expensive and, if your men are in good locations, they will perform better if their abilities are maxed out.

There are 20 different levels in the beginner campaign. However, you can play other user-made levels online, or create your own customized level.

In the level designer, you can lay down tiles to create a course for the Cubemen to battle on. Add layers to make stacked tiles, create floating tiles, increase or decrease the size of a tile, and more.

After you’ve made the course, add teleportation devices, healing station, and player bases.

Then, select the menu button to process your level for play. If there is a problem with what you built, the app will give you an error code and explain the issue. For example, you may not have enough bases on the board, or the bases may be too close together.

Once you’ve corrected the issues, you can save and play the level. If you are proud of your creation, send it into public play where others will be able to enjoy your level, too. 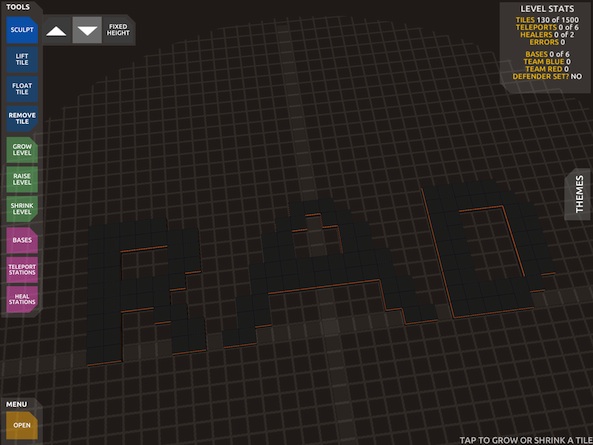 This is an easy to play tower defense game. There are a number of different game modes and advanced options to make every level fun to replay. You get a new challenge each time.

I love the level creation mode. It is lots of fun to build your own massive landscape that you can play on.

You can fight in games with up to six players in multiplayer mode, which really creates an epic battle.

There are still a lot of glitches. When I played against random players in multiplayer mode, the game ended up getting stuck and I had to exit it early. When I was customizing my Cubemen, the menu screen got stuck and showed up in other screens. I had to exit the game and reopen it to fix that bug. I was never able to successfully process a level for gameplay because the app kept claiming that two of my bases were too close together, even though they weren’t.

At only $1.99, this game is great for fans of tower defense games. It is also great for gamers who like to create their own levels. If you are a big fan of multiplayer games, you can compete against five other opponents. Keep in mind that there are still some serious bugs to work out.

Even though there are some nasty bugs, they don’t deter from 90 percent of the game’s options. If you like tower defense games, this is worth the price. If you have a knack for building great level courses, you may have found a home in the level design feature. Cubemen2 is available for the iPhone, iPad, and iPod touch. Download it in the App Store today.