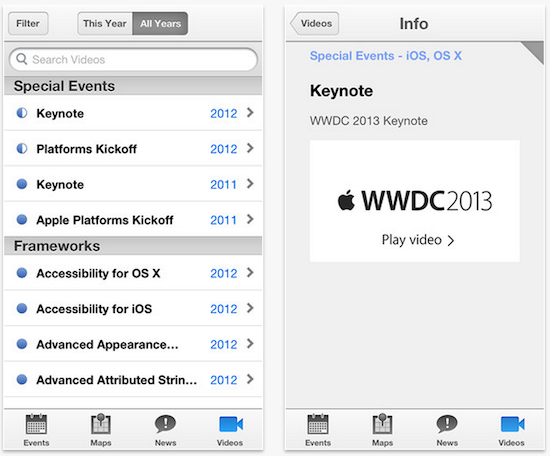 Earlier this week, Apple released an iOS app for its upcoming WWDC. The app will help attendees stay on top of the latest news and events going on at the conference, and allow registered developers to watch daily session videos.

Those that have downloaded the app will be happy to hear that Apple has updated it for the second time this week. This time around, it has received a number of improvements, including several bug fixes for video playback…

Thanks for all the great feedback. This release includes numerous bug fixes:

• Videos now continue to play over AirPlay when the device locks or after interruptions, e.g., a phone call
• When playing videos, the audio ringer switch no longer mutes audio
• Favorites in Events go all the way to 11 PM
• Duplicate section headers in the videos list no longer appear
• The navigation bar in Events no longer disappears
• Blurry text in session details has been corrected
• Version information has been added to augment future bug reports or feedback

Next week is going to be a big one for Apple, particularly Monday. Tim Cook and company will take the stage that morning for their annual WWDC keynote, where they’re expected to talk about OS X 10.9, iOS 7 and other new products.

For those going to the conference, you’ll definitely want to grab this app from the App Store. But for those that aren’t, make sure to tune into iDB Monday morning for complete coverage of Apple’s keynote and other announcements.