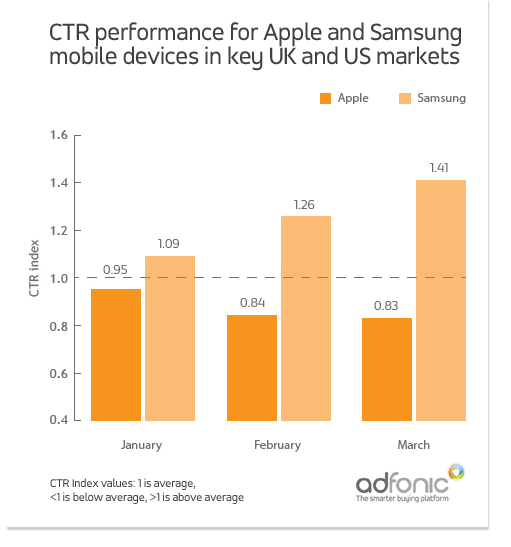 A mixed-message on the state of mobile advertising is out today. In an announcement expected to hearten both the iOS and Android camps, a UK ad firm reports Apple retains its lead in mobile ad share, while mobile ads rendered on devices by rival Samsung are increasingly being clicked.

Combined, Apple’s iPhone and iPod touch account for more than a third of all ad requests handled by the UK-based Adfonic. However, Samsung – with just twelve percent of the mobile ad share – finds the first quarter 2013 click-through-rate on ads served by its Android devices increasingly stronger than Apple…

Although during 2012 Apple led the CTR for smartphones, Samsung smartphones overtook Apple during the first three months of 2013 in the US and UK markets. Additionally, Samsung tablets seems to be within striking distance of the iPad, according to the Adfonic report.

“In a year that could see big hits from Samsung, such as the Galaxy S4 release, we could be witnessing a watershed moment between the two manufacturers,” the ad agency writes. 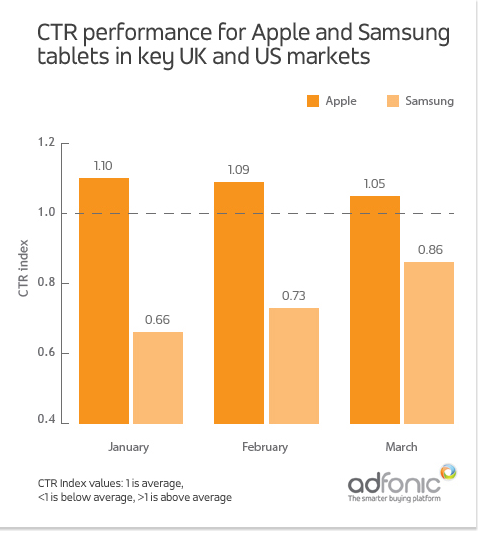 The growth of tablets serving mobile ads continues to grow, with Adfonic estimating slates accounted for about fifteen percent of ad requests received by its network.

While the iPhone, iPad and iPod touch comprised the top three devices in terms of mobile ad requests, the Galaxy S3 and S2 rounded out the top five. Samsung’s Galaxy Tab 10.1 and Amazon’s Kindle Fire tablets registered just over one percent of ad requests.

The survey shouldn’t be interpreted as a measure of overall device sales because the iPad, according to all relevant research, remains the top selling tablet.

Instead, Adfonic data could simply highlight different demographics as iOS users clearly are not as eager to engage with mobile ads as their Android counterparts.