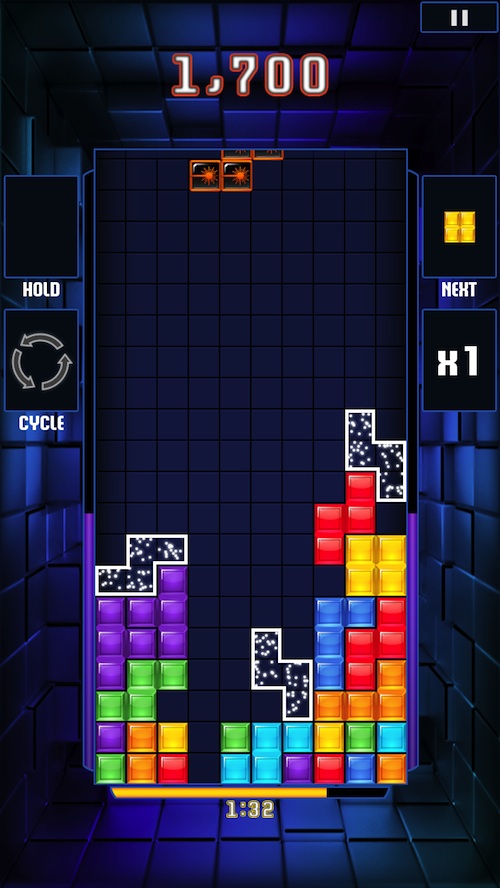 Tetris is one of those games that I never could play very well. I would often drop a block in the wrong spot or not plan ahead for upcoming blocks. I’d end up with too many holes and no way to remove a row.

Tetris Blitz takes much of the hard work and frustration out of the game by giving you block placement options and a two-minute time limit. You’ll never run out of room for blocks because the game will end before you get there…

The app’s design reminds me of 3 o’clock in the morning in Las Vegas. The glamour and glitz is just loud and annoying after you’ve been sitting at a slot machine all night long. Tetris Blitz is like that busy, gaudy slot machine that you’ve been staring at for hours.

The game board is a modernized version of the original with a sci-fi look to it. The music sounds like a 1980s soundtrack, but the sound effects are similar to that of a digital nickel slot.

Players tap the screen in specified spots instead of using a virtual joystick. However, old-school Tetris players will be happy to know that you can change to traditional swipe-to-move controls if you don’t like the simplified version.

There are a whole lot of in-app purchase options based on power ups and coins. Even though this game is heavy on trying to get you to buy stuff, it is playable without in-app purchases. 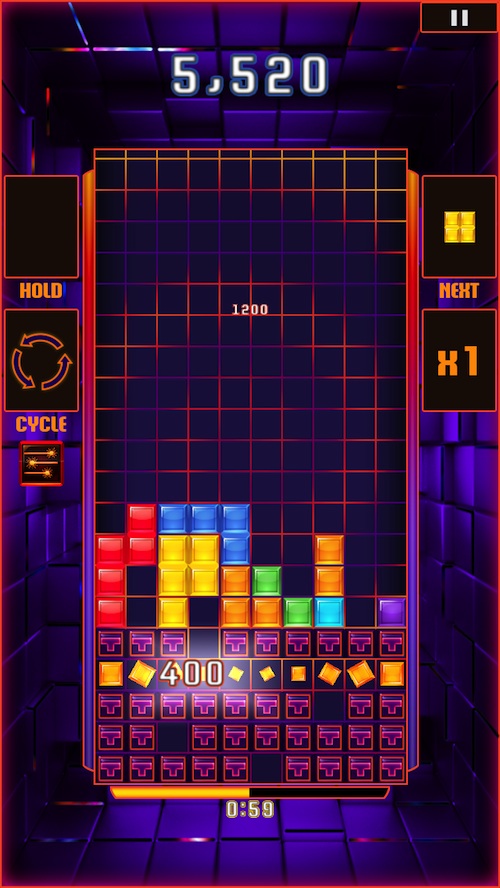 Players start with a two-minute count down. A few rows of blocks are randomly generated on the board and the game begins. There are multiple options for placement on the board for the current block. Tap one to automatically place it. If you don’t tap one of the placement options, the block will eventually float down to the center of the board. If you switch to the traditional controls, there is no placement option, but players are free to place blocks wherever they want to.

As you clear rows, you will fill the “Frenzy” meter bar. When it is full, Frenzy mode will trigger and you will earn double points. Clear rows back-to-back in order to stay in Frenzy mode. After two minutes, the game ends and your points are totaled.

As you play the game, you will earn coins based on your point score. Use the coins to buy power ups that help increase your score. Add special features like Time shift, magnet, lasers and more. Each power up deploys automatically in the game when you trigger its effects. If you run out of coins, you can add more through in-app purchases. You can also buy special power up packs that include things like large quantities of coins, plus additional core and rare power ups.

In Tetris Blitz, collecting power ups is like collecting character cards. There are a handful of core powers, but you can buy special rare ones that may or may not show up on any given day or week. Rare power ups can be purchased with coins when they appear, but if you want to permanently add them to your collection, you will have to buy them.

A lot of people have voiced their hatred for EA Games’ format of offering freemium games and really pushing the in-app purchase features. I agree, for the most part, that games shouldn’t constantly be tricking you into spending a bunch of money. However, I respect that EA Games and other companies like it have researched this model and found that it is more profitable. Freemium games are the way of the future and we just need to accept that.

While this does push IAPs on you fairly heavily, you can play the game entirely for free. Just don’t buy the power ups. It is that simple. Those are the only items that you have to pay for, so just don’t buy them unless you have enough coins earned from playing the game. 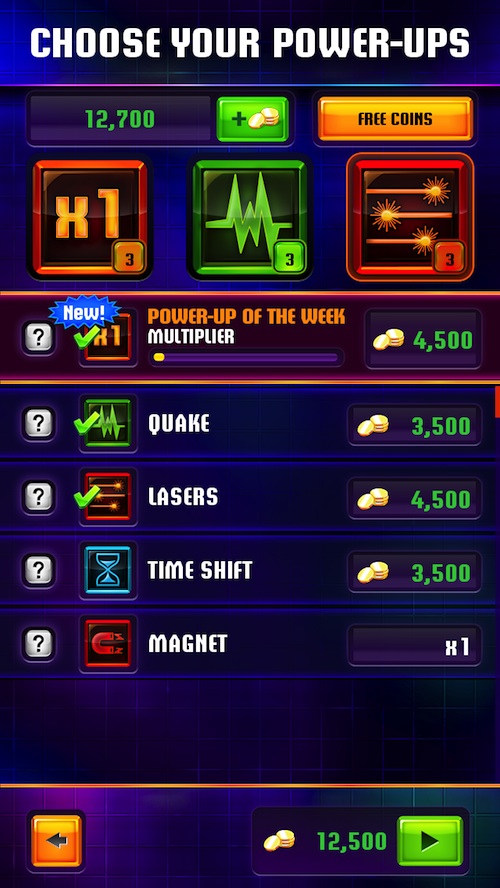 I love the predetermined block positioning. It feels like cheating, but I never end up frustrated for not properly placing a block in the right spot, or accidentally flipping it at the last second. I wish the traditional game of Tetris had that option.

I also like that each game only last two minutes. That way, it doesn’t ever really get any harder. Unfortunately, the things I like about the game are probably the things that Tetris fans will hate about the game.

Obviously, the fact that EA Games pushes in-app purchases on players is its biggest downfall. You are constantly being provided with new power ups to buy and reminded of how you will lose them if you don’t pay for them.

That being said, this game can be played indefinitely for free. So, don’t feel obligated to buy something. If you want to purchase a pro power up pack, go ahead. If you don’t want to spend a single penny on the game, you can still enjoy every block drop without buying anything.

I didn’t really like the game’s gaudy design. It felt busy and loud. I would prefer something with a little less flare.

You can download the game for free and play it for as long as you like without having to spend a dime. However, the in-app purchase options are pushed heavily. If you don’t want to buy any power ups, you can skate through this game with no money spent. However, those helpful bonuses can triple your final score, so you may be persuaded to buy something.

Fans of the original Tetris game will either love this new twist on a classic genre, or hate that the game has been completely overhauled. If you have a problem with EA Games’ overt attempts at getting you to buy stuff, you should skip this. However, I played the game for hours and didn’t spend any money and loved every minute of it. You can play the game over and over again as many times as you like without buying power ups. So, if you can resist the temptation, you can enjoy the game for free. Tetris Blitz is available for the iPhone, iPad and iPod touch. Download it in the App Store today.