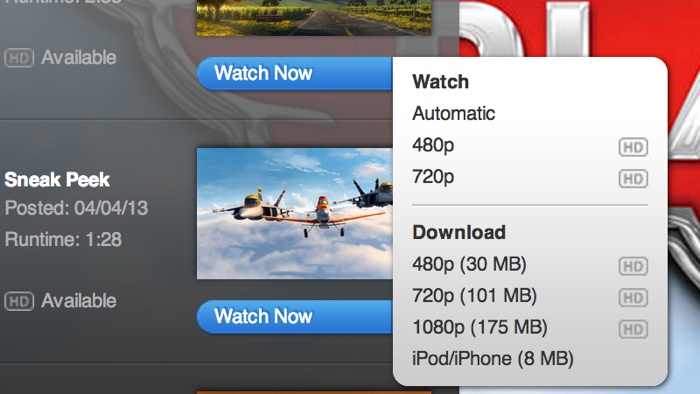 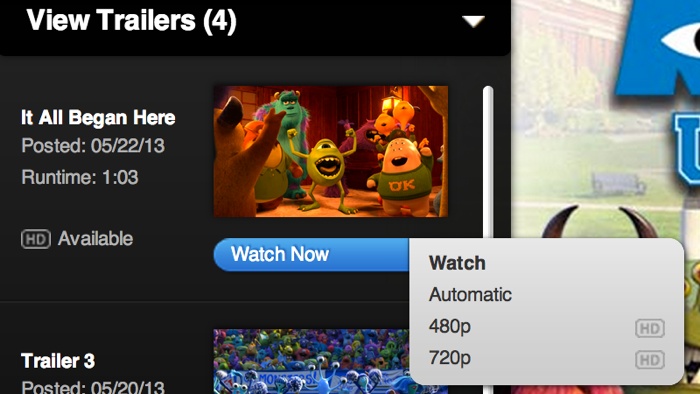 A movie buff like myself has always been a big fan of Apple’s QuickTime movie trailers web site. I’ve especially enjoyed the ability to download my favorite trailers in their full-resolution 1080p glory, useful for times when I’m without or on a slow Internet connection.

Unfortunately – and in a rather surprising move – Apple seems to have started removing the download option from both past and upcoming submissions. Worse, the company appears to have effectively eliminated 1080p trailer availability, meaning people accessing the QuickTime movie trailers web site from their computer can now only stream those videos in either 480p or 720p…

That’s a step back from the previous options that allowed for 1080p streaming along with download options for 480p, 720p and 1080p.

As you can see in the before (left) vs (after) comparison top of post, trailers uploaded to the site after May 22 no longer seem to allow for downloads.

MacRumors, which first spotted the unusual change, observes that while some trailers uploaded before May 22 can still be downloaded, Apple is actively removing the download option from movies with multiple trailers that have a trailer uploaded after that date.

I was able to confirm the finding.

It seems I can no longer download trailers for multiple recent and past movies and can only stream the videos in 720p, which is quite a bummer.

“While older trailers can still be downloaded from the site,” MacRumors points out, “Apple appears to be removing downloads from older trailers as newer trailers are added, slowly phasing out the availability of trailer downloads altogether.”

Firstly, Apple may have bowed to pressure from Hollywood majors that own these trailers. If true, that would be a very unusual request, to say the least, especially given that YouTube streams trailers in 1080p.

Secondly, the change could have something to do with a rumored Apple television set that’s supposedly in the works. Perhaps Apple wants people to enjoy full-resolution movie trailers exclusively on the upcoming TV set, or on their existing telly through the $99 Apple TV set-top box.

Either way, I’m not fond of this change.