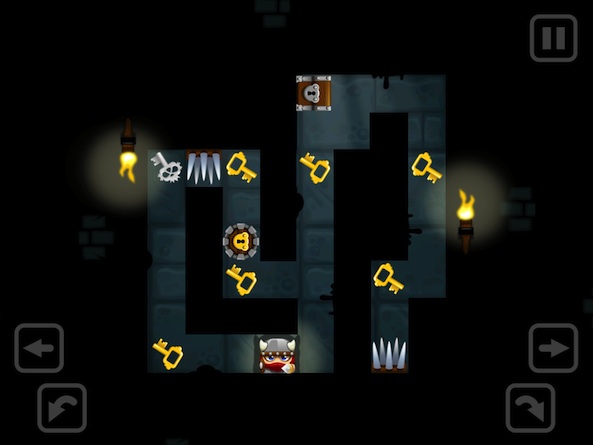 Dungeon crawl games are a gem for old-school gamers and a joke for newer generations. The old folks love the repetitive, monotony of going room-to-room, unlocking chests and killing baddies with no other distinctive plot. While young whippersnappers think dungeon crawls are boring and a waste of time.

As is typical of dungeon crawls, this game is simple in design. The only accessible area is the room’s floor. The rest of the screen is shadowed from view. The angle is a traditional top-down scene.

The few items that you can see are squished up and boxy, like a bobble-headed Viking and a marshmallow-shaped orc. In any given room there will only be a couple of keys, a treasure chest, a locked exit, and maybe a bad guy or two and some cannonballs.

The characters have a cartoon-like design with big heads and tiny bodies. The art is colorful and bright, even though the dungeons are dark and gloomy.

You can’t walk around freely in the room. The game’s controls only allow you to move left and right. You can flip the entire room around so that moving left or right gets you where you want to go, but other than that, your movement is limited.

There are 10 different dungeons, each with 10 different rooms to unlock. You can play any room in a dungeon once it is unlocked, but you must unlock all 10 rooms in each dungeon to access new ones. 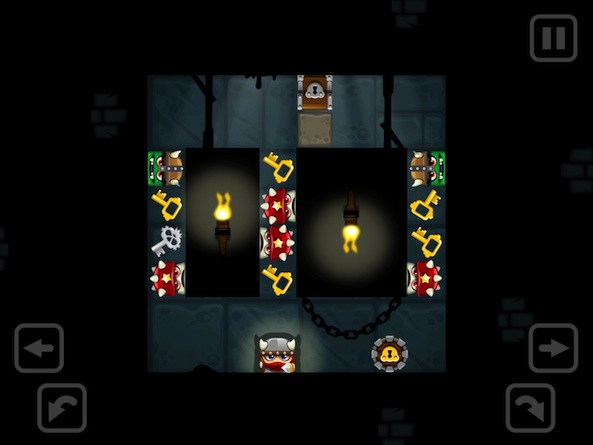 Players must gather all of the gold keys in a dungeon room in order to unlock the exit and escape. There will always be one additional skeleton key that will unlock a treasure chest. However, that key is usually a bit more difficult to get to. If you unlock an exit, you can leave without scoring the treasure that awaits you inside the locked chest.

To move around, walk to the left and right. If a key is above you, you can still get to it by flipping the room around. This will re-situate both you and the placement of the key.

If you plan your moves carefully, you can move left or right in mid fall. This little trick is important for collecting keys and avoiding spikes. To move in mid fall, tap the rotate button and then immediately tap the left or right movement button.

There are 100 levels divided into 10 different dungeons. The obstacles get increasingly more difficult as you will be faced with multiple cannonball attacks, dangerous spikes, and annoying bats.

As you can tell by the description of the game play, this is less of a dungeon crawl and more of an action puzzle game. Yes, you must kill monsters and loot treasure in every room, but how you get to those items is the point of the game.

While I prefer an old-fashioned dungeon crawl to a puzzle game any day of the week, I did enjoy mixing the two genres together. It’s not entirely unlike eating dark chocolate with sea salt. It sounds gross when described to you, but when you actually try it, it is good enough to keep you coming back over and over again.

I also like the level of challenge. At some points, it feels like the obstacles are too difficult to overcome. But, then I would realize the trick I was missing and be able to finish the level.

This game may be too simple for some players. I found it to be just right for my abilities. However, there is no way to increase or decrease the level of difficulty, so some gamers may scoff at the simplicity and wish for something with more of a challenge.

It might be nice if the game included a timed option, or extra points for fewer room rotations. As it stands, there isn’t really any replay value because there is no reason to go back and play a previous room.

The game is only $0.99, which is just right for a game like this. There are no in-app purchases to trick you into spending more either. As I mentioned above, the game has very little replay value, so your $0.99 will only last as long as it takes you to get through 100 levels. If the developers add timed elements, or offer incentives for fewer moves, it would make the game just a little bit sweeter.

This casual game mixes the simplicity of room-to-room dungeon crawl with the brainteaser of an action puzzle game. You can satisfy the old man in you while letting the kid in you enjoy a more modern type of game. This game is kind of like Shredded Wheat. In fact, the characters are kind of shaped like the wheat-based cereal. Little Viking Dungeon of Doom is available for the iPhone, iPad, and iPod touch. Download it in the App Store today.