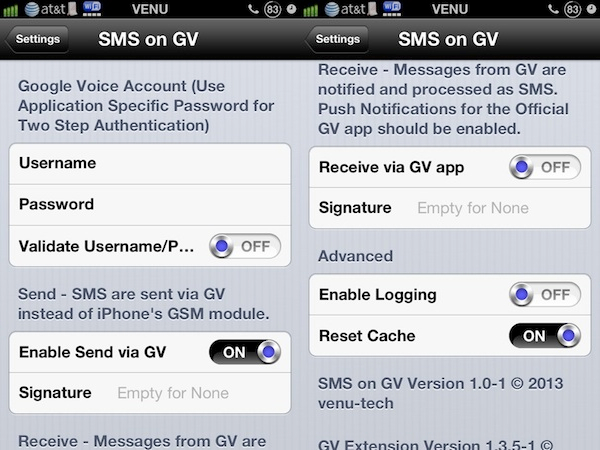 Avid Google Voice users will be happy to hear that there’s a new jailbreak tweak out that integrates Google’s SMS service into the stock Messages app. We’ve seen tweaks like this before, such as SMS GV Extension. But to my knowledge, none of them made it to iOS 6.

The tweak we’re going to be talking about today, however, does support iOS 6 (as well as later versions). It’s called SMS on GV, and like the others we’ve seen, it allows you to send and receive text messages using your Google Voice account from within Messages…

And it works just how you’d expect it to. Once the tweak is installed, you’ll pop into your Settings app and login using your GV credentials. From there it will verify you, and then you can get to work configuring the different options. There’s actually more than you’d think.

The menu features independent toggles for both sending and receiving text messages. Enabling the ‘Send via GV’ option means that all outgoing messages will come from your GV account, instead of your iPhone’s GSM module. And there’s also a ‘Receive via GV’ option.

As good as it all sounds though, there are some limitations. The developer warns that with SMS on GV installed, you can’t send pictures (or likely any MMS) via iMessage. And he says that the tweak won’t work with iPod touches, or iPhones and iPads without SIM cards.

But other than that, SMS on GV seems like a solid tweak. Honestly I don’t use Google Voice myself, but I can see how useful something like this would be for someone that does. If you’d like to check it out for yourself, you can find it in Cydia, in the BigBoss repo, for $2.