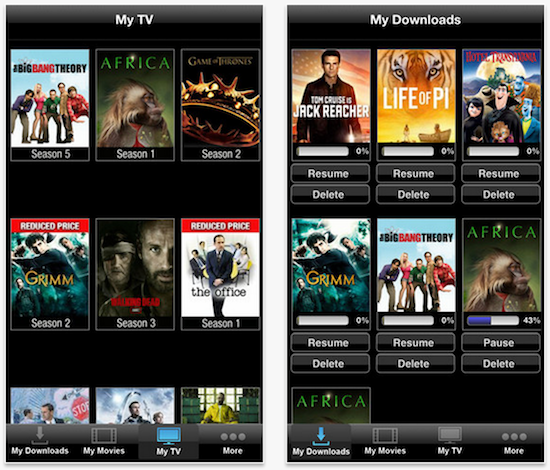 Folks who use the streaming video service Vudu will be happy to hear that it has updated its iOS client with a major new feature this week. The Walmart-owned content delivery company has added the ability for users to download movies for offline viewing.

For those unfamiliar with the service, Vudu is similar to iTunes in that it allows you to rent and purchase movies a la carte—no monthly subscription fee. Rentals typically run between $2 and $5 and can be played back on a number of electronic devices…

• You can now download and watch your collection of movies and TV shows offline.
• We’ve listened to your feedback and made the Player easier to use.
• Closed Captioning for the iPhone is now supported. (Closed captioning is already supported for iPad).
• General bug fixes have been applied.

The new offline viewing feature is actually a pretty big deal. I know the Android Vudu app has been capable of doing this for a while, but it’s nice to finally see it make its way to iOS. You know, it’s not something that’s offered by Netflix or many other services.

As far as the other improvements, the addition of closed captioning for the iPhone is a nice (though long overdue) touch. And I don’t know if it’s just the placebo effect, but I feel like the app does seem a bit more user-friendly since the last time I used it.

I will say that if you’re not currently using Vudu, it’s worth checking out as a Netflix or iTunes alternative. It has a huge selection of movies and TV shows, and it also allows you to redeem those pesky UltraViolet codes you get with some DVD purchases.

If you’re interested, you can find VUDU Player in the App Store, for both the iPhone and iPad, for free. You’ll obviously need to set up an account for it to do you any good, but Vudu is offering 10 free movie downloads and other specials right now for new users.