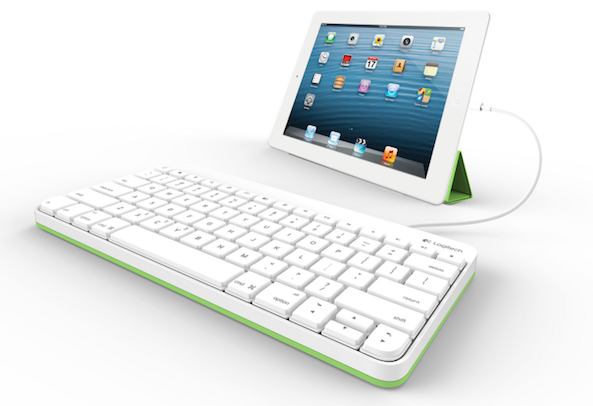 Wireless Bluetooth keyboards for the iPad are a dime a dozen these days. It seems like everyone makes them, including Kensington, Targus, and Belkin. In fact, ZAGG just launched a pair of new ones yesterday in the form of the Cover and the Folio.

But what you don’t see everyday are wired keyboards for the iPad, like this one that Logitech just unveiled. The Wired Keyboard is durable, spill-resistant, doesn’t require Bluetooth pairing or batteries, and comes in both 30-pin and Lightning flavors…

Because of these unique features, Logitech says that the accessory is geared toward classroom use. It acknowledges that iPads are being used more frequently than ever in education, and it wanted to create a product specifically for that environment.

From Logitech’s press release (via ZDNet):

“Schools are increasingly purchasing iPads for use in the classroom,” said Mike Culver, vice president and general manager of mobility at Logitech. “While tablets are enabling new ways of teaching and testing, there’s a challenge when a teacher needs to simultaneously pair multiple iPads with multiple wireless Bluetooth keyboards. We developed the Logitech Wired Keyboard for iPad to specifically solve this problem, so students can now simply plug it in and start typing.”

The keyboard will come with a limited 3-year hardware warranty, as Logitech says that the low-profile keys are built to withstand more than 5 million strokes. And speaking of keys, it will also include iPad-specific shortcuts for functions like copy and paste.

Both versions of the Wired Keyboard for iPad will be priced at $59.99. The model with the Lightning connector will be available for purchase in August, and the 30-pin model will appear in October. Both are available for pre-order now at Logitech.com.