Tomorrow will be a pretty big day for Apple CEO Tim Cook, finance boss Peter Oppenheimer and Tax Operations head Phillip Bullock as the three men are scheduled to appear in front of the United States Senate Permanent Subcommittee on Investigation and give testimony regarding the company’s creative approach to tax avoidance.

Apple ahead of the hearing published a lengthy document on its web site which pushes for tax reform on argument that America’s tax system undermines the nation’s competitiveness in the “digital economy” because the current tax code was written for the “industrial era.” As expected, some U.S. senators beg to differ and think Apple is just being creative in its tax avoidance strategy.

This is bound to get more complicated when Tim Cook & Co. find themselves in hot water explaining to U.S. Senators how the company sidesteps U.S. taxes. Get your popcorn out…

Apple wasn’t satisfied with shifting its profits to a low-tax offshore tax haven. Apple sought the Holy Grail of tax avoidance. It has created offshore entities holding tens of billions of dollars, while claiming to be tax resident nowhere.

We intend to highlight that gimmick and other Apple offshore tax avoidance tactics so that American working families who pay their share of taxes understand how offshore tax loopholes raise their tax burden, add to the federal deficit and ought to be closed.

Apple’s 17-page testimony states the company “looks forward to working with the Subcommittee on its efforts to encourage comprehensive reform of the U.S. corporate tax system.”

Apple claims to be the largest U.S. corporate taxpayer, but by sheer size and scale, it is also among America’s largest tax avoiders. A company that found remarkable success by harnessing American ingenuity and the opportunities afforded by the U.S. economy should not be shifting its profits overseas to avoid the payment of U.S. tax, purposefully depriving the American people of revenue.

It is important to understand Apple’s byzantine tax structure so that we can effectively close the loopholes utilized by many U.S. multinational companies, particularly in this era of sequestration. I have long advocated for modernizing our broken and uncompetitive tax code, but that cannot and must not be an excuse for turning a blind eye to the highly questionable tax strategies that corporations like Apple use to avoid paying taxes in America.

The proper place for the bulk of Apple’s creative energy ought to go into its innovative products and services, not in its tax department.

Apple is thought to be America’s largest corporate taxpayer, having paid nearly $6 billion to the U.S. Treasury in fiscal 2012, accounting for $1 in every $40 in corporate income tax the U.S. Treasury collected last year. The company also has created 600,000 jobs in the U.S. alone.

CEO Tim Cook told the Washington Post last week that Apple is on track to pay $7 billion in corporate taxes this year.

“You may not know this, but Apple likely is the largest corporate taxpayer in the U.S.,” he said. “When you combine state and federal, Apple is paying approximately $1 million an hour in just domestic income taxes.”

In another pre-emptive move, Cook also told Politico that “Apple does not funnel its domestic profits overseas,” adding:

We don’t do that. We pay taxes on all the products we sell in the U.S., and we pay every dollar that we owe.

Apple’s lengthy testimony suggests the company will push for a tax reform that should be revenue neutral, eliminate all corporate tax expenditures, lower corporate income tax rates and implement a reasonable tax on foreign earnings that allows free movement of capital back to the U.S.

In addition to standard multinational tactics, the Senate Permanent Subcommittee on Investigations has found that “Apple established at the apex of its offshore network an offshore holding company that it says is not tax resident in any nation”.

The money is funneled through Apple Operations International incorporated in the southern Irish city of Cork in 1980, which has no employees and no physical presence, “but keeps its bank accounts and records in the United States and holds its board meetings in California.” 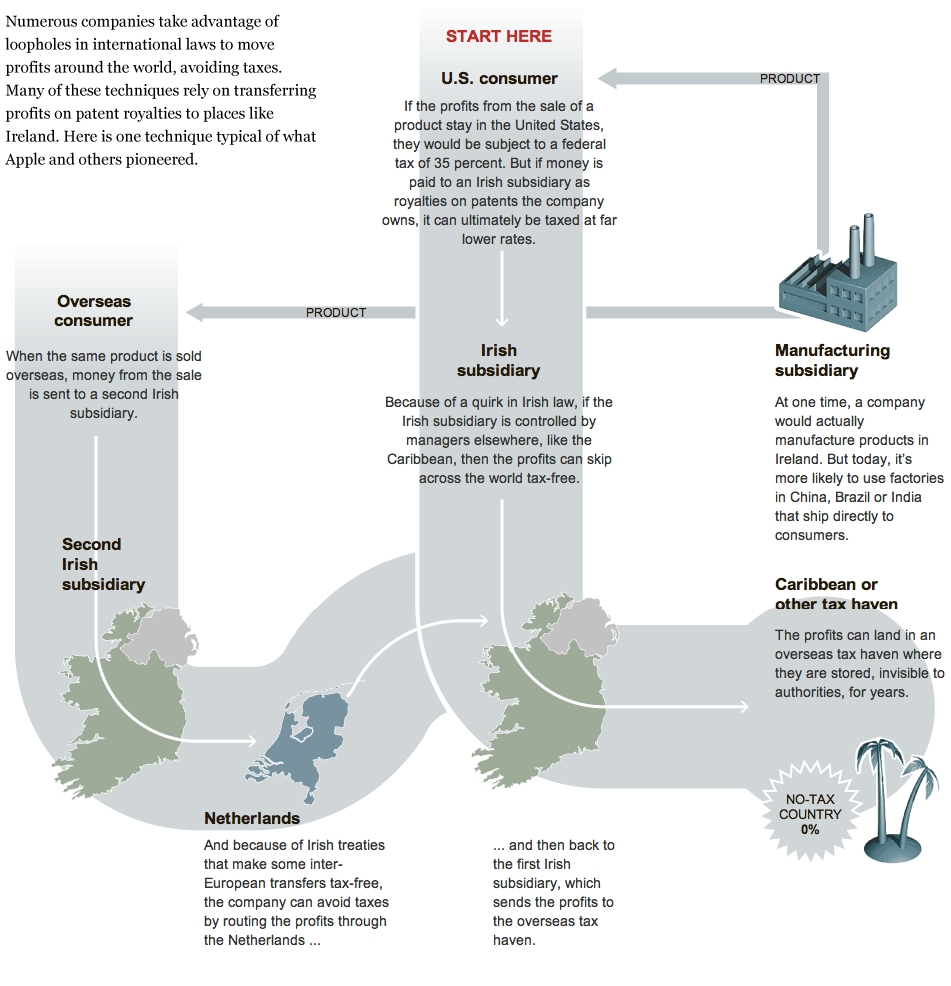 The entity exploits the gap in Ireland asserting tax jurisdiction only over companies that are managed and controlled in Ireland and the United States basing tax residency on where a company is incorporated.

“Apple Operations International has not filed an income tax return in either country, or any other country, for the past five years. From 2009 to 2012, it reported income totaling $30 billion,” Levin writes.

The New York Times explains that Apple Operations International actually pioneered a “double Irish with a Dutch sandwich,” basically a tax avoidance technique which reduces taxes by routing profits through Irish subsidiaries and the Netherlands and then to the Caribbean.

“Today, that tactic is used by hundreds of other corporations – some of which directly imitated Apple’s methods, say accountants at those companies,” the paper writes.

As pointed out by Philip Elmer-DeWitt of Fortune, Apple employs 4,000 people to move its billions around the world and the practice is “perfectly legal.” Apple’s written testimony bluntly states that the company “does not use tax gimmicks.”

Apple does not move its intellectual property into offshore tax havens and use it to sell products back into the US in order to avoid US tax; it does not use revolving loans from foreign subsidiaries to fund its domestic operations; it does not hold money on a Caribbean island; and it does not have a bank account in the Cayman Islands.

Apple acknowledges it has substantial foreign cash because it sells the majority of its products outside the US, with international operations accounting for 61 percent of Apple’s revenue last year and two-thirds of its revenue last quarter.

“These foreign earnings are taxed in the jurisdiction where they are earned (‘foreign, post-tax income’),” the document reads. The Wall Street Journal sheds more light, noting that Ireland’s statutory corporate tax rate is already 12 percent versus 35 percent in the U.S.

Moreover, the Journal writes, Ireland-based Apple Sales International recorded $22 billion in pretax earnings on selling products to overseas distributors. Still, that entity paid only $10 million in taxes, which is a tax rate of about .05 percent.

Apple Operations Europe, another Apple subsidiary, maintains its corporate profit isn’t taxable by any country, according to the investigation.

The hearing is set to start at 9:30 tomorrow morning.