If you’ve been looking to enjoy BlackBerry’s upcoming Messenger app on your iPad, bad news. Blackberry’s software portfolio chief Vivek Bhardwaj tells Trusted Reviews that the app will only target the iPhone and Android smartphones, at least initially. Although he wouldn’t ruled out the possibility of an iPad edition down the road, he didn’t specifically mention it either.

That’s hardly surprising given BlackBerry’s lackluster PlayBook tablet and the firm’s general failure in the tablet space, though it’s hard to escape the feeling that BlackBerry Messenger for iPad would make sense for the business types who’ve come to depend on their Apple tablet for work…

Here’s the quote from Trusted Reviews:

At this point it is iOS and Android, and that’s iOS phones running iOS 6 and higher.

Smartphone is our real focus and again it comes back to what BBM is. If you look BBM and the engagement and the activity, it’s because it is mobile, because people are on the go.

When you start looking at tablets, computers and other screens, the usage model changes and behavior changes. For us right now the absolute focus is getting BBM onto smartphones.

He makes a good point.

Chatting on a tablet is only sensible if you have the device with you all the time. Even though the vast majority of tablet-totting business folks do carry their tablet with them, if there’s any device that’s with us all the time it’s our smartphone. 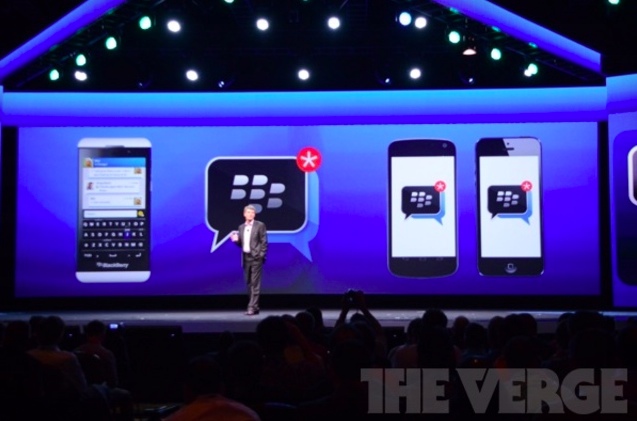 From that point of view, BlackBerry’s focus on rolling out the Messenger app on smartphones may be a prudent decision. Moreover, we still don’t have native iPad builds of Facebook’s Messenger app and Google’s just-released Hangouts clients for iOS.

The iOS edition of BlackBerry Messenger will only work on iPhones running iOS 6 and support the following features at launch, among others:

As for competition, Google on its part hinted at an iPad build of Hangouts and the social network giant Facebook has been rumored to be working on an iPad edition of Messenger for quite some time.

With that in mind, we’re expecting these major chat services to become available on tablets later this year, and BlackBerry better follow suit sooner than later.

Do you care at all about BlackBerry Messenger for iPhone?