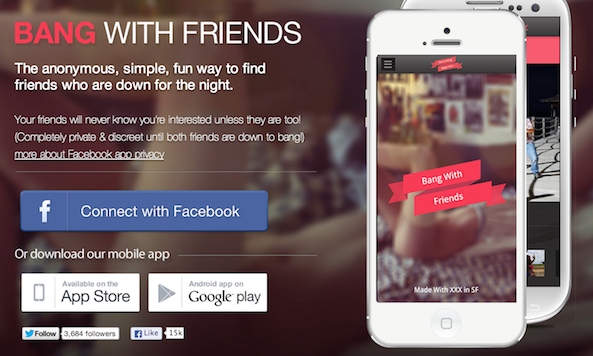 Apple has decided to pull Bang With Friends, a controversial app that lets users anonymously pick which of their Facebook friends they’d like to hook up with, and then notifies them when there’s a match, from its App Store this afternoon.

There’s no word yet on why the app was removed. But between Apple’s staunch attitude toward all things vulgar, and its app review team’s track record for pulling software on a whim, we’re not at all surprised to see Bang With Friends gone…

Cofounder and CEO Colin Hodge broke the news to Gawker’s ValleyWag blog, saying that they are working with Apple to get the application, which now caters to more than 1 million users, back into the App Store as quick as possible.

Hodge, a computer software engineer, started Bang With Friends with Omri Mor back in February. The duo reportedly just locked up over $1 million in venture capital funding, and launched on both the iPhone and Android a little over a week ago.

Despite its vulgar premise, BWF has received a lot of attention for its method of anonymously matching up users. Some even think the double-blind formula—which only notifies users when there’s a match—will revolutionize social interaction.

Anyway, Apple has not responded to requests for comments yet on why it pulled the app, but it has been pretty active on that front lately. Earlier this month, it forced LINE to stop offering pay-for virtual gifts, and last month it pulled AppGratis.