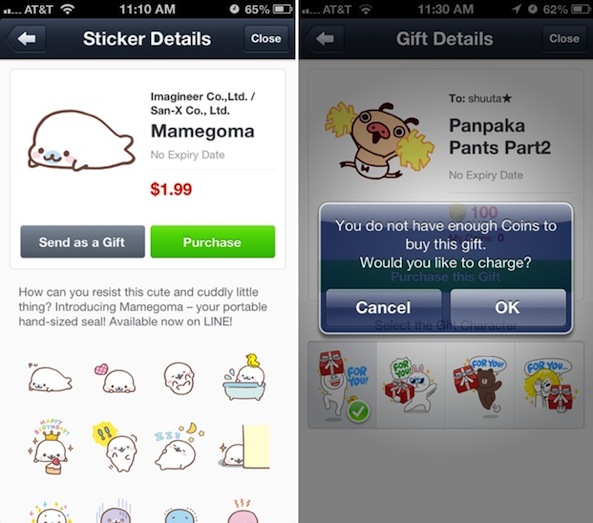 Apple’s app approval team has seemingly been on a warpath lately, pulling popular titles like AppGratis from the App Store without much warning or explanation. It’s clear that the company is in the process of revamping some of its policies.

Case in point, LINE, a popular free messaging app, was forced by Apple to remove one of its key features today. Per company orders, the developers had to eliminate the ability for its users to purchase and send sticker sets as gifts to friends…

From the official LINE blog (via The Next Web):

“As of 15:00 today, May 10, 2013, we regret to announce that we will be withdrawing the function to send purchased stickers as gifts to friends on the iPhone version of LINE.

We received a request directly from Apple who operates the AppStore, that this sticker gifting function will have to be withdrawn from the app, and we do apologize for the disappointment this may cause to all of you who are having fun sending stickers as gifts to your friends.”

For those unfamiliar with LINE, it’s a popular Asian mobile messaging service much like WhatsApp or Kik. This sticker feature that was removed was essentially a store of glorified emoticons, which users could buy and send to friends as gifts.

Unfortunately, virtual goods are a major part of its business. The company says that 30% of its revenue from its last quarter, which is equivalent to about $17 million, came via stickers. But it doesn’t say how much of that was made up of iOS users.

As for the removal of the sticker-gifting feature, it’s still unclear exactly why it was pulled. Several other apps in the App Store, like Path and Facebook, offer in-app stickers, and LINE itself has been doing it for months. But I suppose that’s part for the course lately.

The good news, for users anyway, is that it’s still possible to send free sticker sets to friends, and to purchase sets for personal use. Gifting stickers is also still available via Android and other versions of LINE’s app.