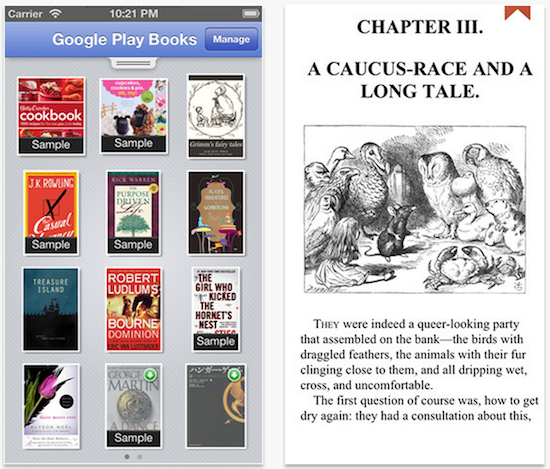 Additionally, Google also took the opportunity yesterday to update some of its apps. It gave Gmail some new action buttons, showed off a preview of its upcoming Maps update, and released a new version of its Play Books app for both iOS and Android…

– Support for reading your own PDF or EPUB files. You can upload the files using Google Play web site, and read them on all your devices.
– Stability and performance improvements.

Admittedly, the list of improvements here is short, but the first one is extremely invaluable. Now, even non-Google Play Books customers can take advantage of the app by uploading PDF and ePUB files to the Play cloud, and viewing them on their phone or tablet.

As for the app itself, I’m not really a fan. The UI obviously hasn’t gotten the gorgeous overhaul that the rest of Google’s iOS apps received last year. And, like other eBook apps, you can’t browse the Google Play store, meaning you’ll have to add books from another device.

But according to Google, Play Books has the largest eBook selection available, and its prices are among some of the lowest I’ve seen. So maybe it’s worth checking out. If you’re interested, you can find the new Google Play Books app in the App Store for free.