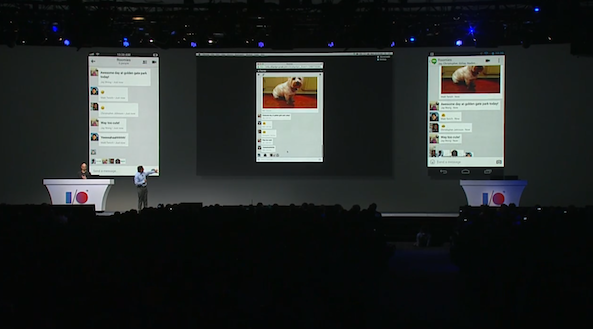 Google’s I/O keynote is still ongoing, and the company just unveiled a major new service: Hangouts. Originally rumored to be called ‘Babel,’ Hangouts is a cross-platform messaging system that will take the place of Google Talk, Google+ Messenger, Google+ Hangout video chat, and pretty much everything else.

It’s basically a messaging app, in the same vein as WhatsApp or Kik, offering synchronized chat across virtually all of your devices. Google has mixed in a lot of its own personal flavor though, building in the ability for users to go back through their chat history, delete messages, and even grab files from past conversations…

Continuing with the differences, the Hangout app presents users with a list of recent text conversations, rather than a contact list. Each conversation gets its own name, and is stored in the cloud, allowing users to message others even if they’re not connected. This also allows for seamless syncing between multiple devices.

TechCrunch has more on the service:

“Presence, or knowing when friends are available to chat, is a big focus. You can see when friends are on Hangouts, if they’re currently typing, and if they’ve seen your messages [also known as read receipts]. Using Google+ Circles, you can select specific friends or a whole group to start a chat with.

Hangouts takes care to deliver your messages to whichever web interface or mobile app your friends are using. If you’re offline, Hangouts will store your messages until you return. Unlike Google Talk, it won’t send you an email every time you get a message while offline.”

And all of this focus on ‘presence’ pays off, as Hangouts is constantly aware of what platform you’re using to chat. This way, you won’t have to worry about receiving duplicate notifications on different platforms. The idea here is that you can start and stop conversations smoothly regardless of if you’re on desktop, Android or iOS. 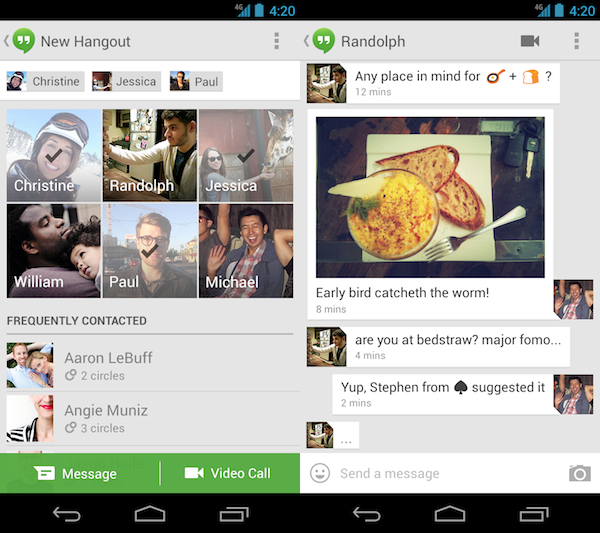 It seems like Google has thought of everything with Hangouts, except for text messaging. Unlike iMessage, or Facebook Messenger (for Android), it can’t turn messages into SMS for folks that don’t have the app. So if you’re wanting to talk to a friend over Hangouts, you’ll have to send them a text informing them to download it.

At any rate, we’ll obviously know a lot more about Hangouts once it becomes available. The app is expected to land on iOS, Android and desktops later today, so stay tuned.

Update: the app is now available in the App Store.