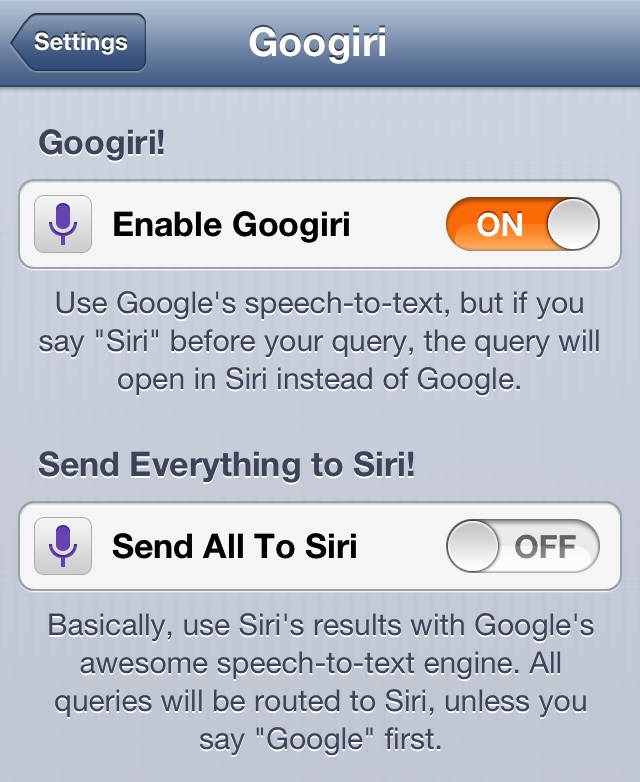 I don’t think I’ve left it up to sleuthing to understand that I pretty much loathe Siri. It’s a great idea no doubt, but the execution is so poor that it makes me hate the service. Perhaps I’m in the minority, but Siri rarely, if ever, does what I want it to. I ask her for directions to Starbucks, and she replies with “I can’t find a place called scarred duck.” It’s really pathetic.

So imagine how ecstatic I was when I first tried out the voice search embedded into Google Now. It was amazingly accurate, fast, and it didn’t sound like an old worn out robot from the 70’s. Sad to say, but this is the how Siri should be. Google owns the new gold standard for voice recognition…

While this was a good stopgap, sadly there are certain commands that the Google voice search just can’t handle. Setting up reminders doesn’t work, neither do sending new tweets and posting new messages to Facebook. In fact, none of the system level commands work with Google voice search. What to do now?

Well, it took a while, but we finally have a solution, or at least a stopgap that’s closer to the final solution; it’s called Googiri, and it’s a tweak that allows you to execute Siri commands directly from the Google voice search interface. It makes it so that you can handle all of your voice command needs from one handy interface and shortcut. It’s not a perfect solution, but it’s the best solution that we have thus far.

Googiri is a very simple jailbreak tweak that places a preference panel in the stock Settings app. The Googiri preferences contain three toggles for managing how the tweak operates. The first toggle — Enable Googiri — is an overall kill switch for toggling the entire tweak on or off. The second toggle — Send All to Siri — is a switch that allows you to route all commands to Siri. The final toggle — Route System — is a setting for routing all system commands to Siri.

That may all seem a bit complicated, but it’s actually fairly simple and straightforward. If you enable just the first option — Enable Googiri — then all commands will be routed to Google as normal, except when you preface a command with the word “Siri.” Anything prefaced with that word will be routed to Siri instead. 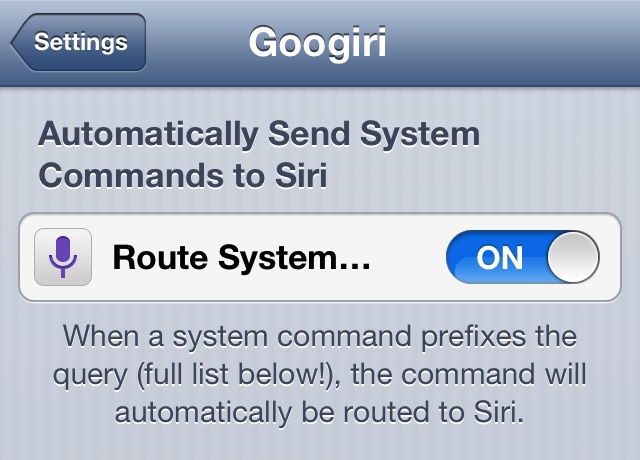 With Send All To Siri enabled, it’s the exact opposite effect. With this mode enabled, all commands will be sent to Siri, and only when you preface a command with the word “Google” will the command be sent to Google.

Lastly, we have the new Route System toggle. It allows for the most natural use of both Google voice search and Siri. Unless you state a command that Siri recognizes as a system command, then all of your commands will be sent to Google. So if you say “show pictures of an elephant,” Google will do its thing and pull up pictures of elephants. But if you say, “Remind me to walk the dog,” then Siri will step in and schedule a reminder. A full list of all of the system commands are included in Googiri’s preferences. 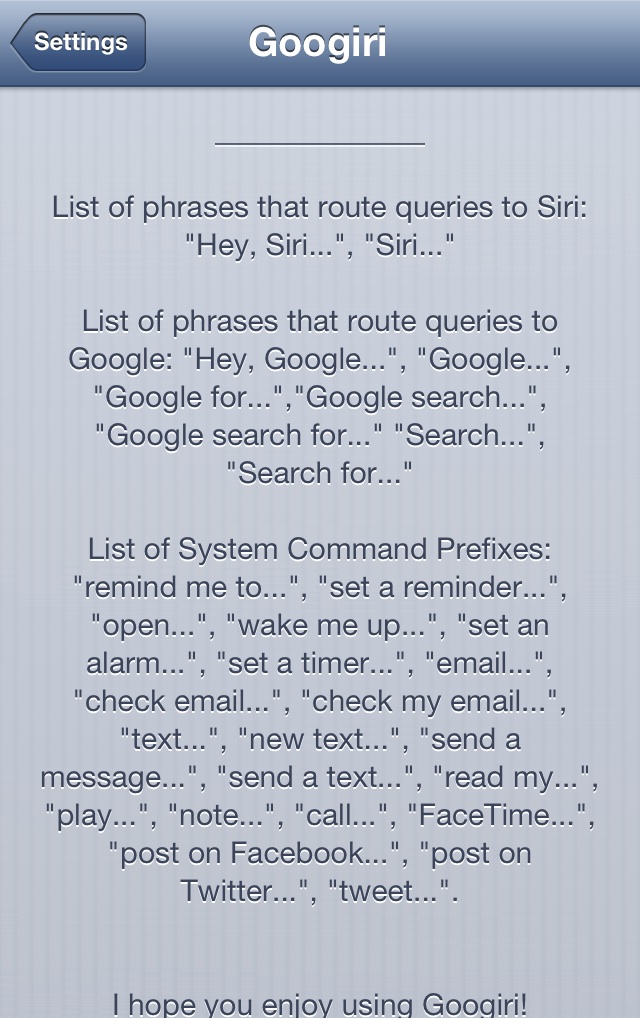 As I stated, it’s a bit hard to explain this tweak without actually seeing it in action. For this reason I’ve created a video to help walk you through the steps. Although it’s a bit clunky switching between Google and Siri’s interfaces, Googiri is without a doubt the best jailbreak tweak for enjoying the best speech recognition software, while still maintaining your iPhone’s stock Siri functionality.

For those wondering, it’s recommended that you combine this tweak with something like NowNow in order to get the maximum effect. Check out our full NowNow walkthrough for more information.

Googiri is available free of charge on Cydia’s BigBoss repo. Do you think it’s a decent compromise for those of us who like to use Google voice search instead of Siri? Share your thoughts about it all in the comments section below.