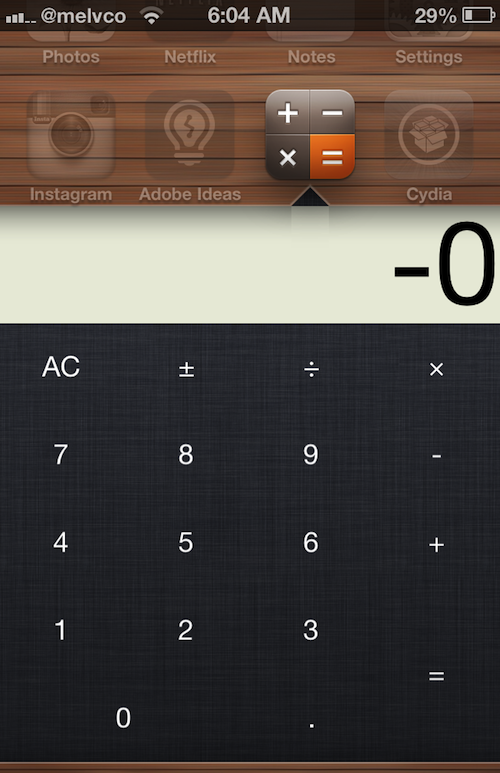 It seems like developers are really enjoying making add-ons for Velox. The jailbreak tweak was released a little over a week ago, and already we’ve seen several extensions for it like Addial, Compass and App Store.

Today we’ve got another one for you, called Calculator for Velox. And as you’ve probably already guessed by now, it provides you with Home screen access to your Calculator app…

Similar to other Velox add-ons we’ve seen, there’s not much to the tweak itself. There’s no Spring board icon or settings to configure. Once installed, it takes effect. And it stays that way until you decide to uninstall it.

Activating the tweak is also similar to other add-ons. Simply swipe down (or up, depending on your settings) on your Calculator app icon to reveal its enhanced folder. And that should bring up a working, mini calculator.

On paper, it’s a great idea. But it’s been executed poorly. I had problems getting a few of the buttons to work—particularly the clear button, forcing me to close the folder and reopen it. It worked, it just felt very beta to me.

That being said, the tweak is probably still worth checking out if you’re a Velox fan. If you’re interested, you can find Calculator for Velox  in Cydia, in the ModMyi repo, for free.