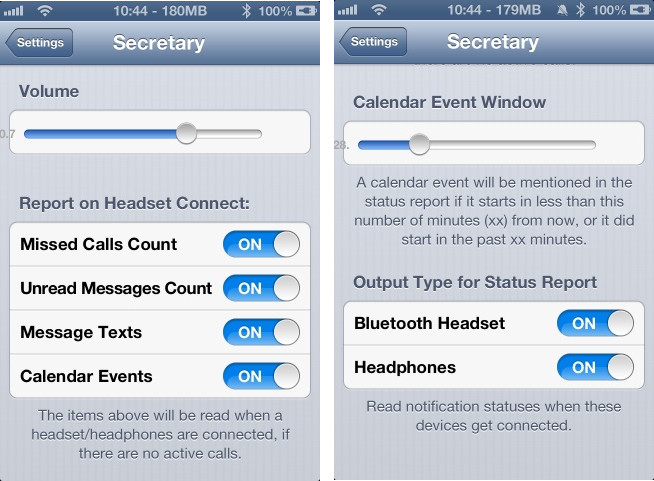 Looking for a new way to sort through notifications on your iPhone? If so, you might want to check out Secretary, a new jailbreak tweak that will read your notifications aloud to you upon connecting your device to a Bluetooth speaker or headset.

Once activated, the tweak can tell you how many unchecked missed phone calls and messages you have, as well as the number of impending calendar events. It can also read your text messages aloud to you using text-to-speech, similar to Siri…

With it installed, all of Secretary’s options can be configured from the Settings application. And these options include the volume level of announcements, which events you want announced, and which device accessories you want to trigger the tweak.

As far as its text-to-speech (TTS) functionality goes, Secretary can read both SMS and iMessages. And since the tweak can speak all of the TTS languages supported by iOS, you can choose from a number of different global languages and dialects.

For me, this is one of those tweaks that sounds cool, but it’s not something I would really use. But if you’re interested in checking it out for yourself, you can find it in the BigBoss repo for $1.99. Just make sure you have a jailbroken device on iOS 6 or later.

Have you tried Secretary yet? What do you think of it?