For some time, whenever Android proponents argued for the platform’s dominance based on handsets shipped, Apple fans would counter by pointing out the iPhone was tops in profits.

Indeed, a new report shows Apple had more than half of all mobile profits during the first quarter of 2013, leading Android handset rival Samsung.

According to Canaccord Genuity, the iPhone maker came away from this year’s first period with 57 percent of mobile phone profits, despite having just eight percent of the worldwide handset market share.

By contrast, South Korea’s Samsung – which leads in market share – earned just 43 percent of the share of profits. However, the two companies could soon switch positions. The analyst firm claims iPhone sales will be weak in the upcoming June quarter, overshadowed by profits fueled by Samsung’s new Galaxy S4…

Before Apple adherents break a finger pointing out what’s wrong about such a forecast, we’ll take note of some counter-arguments. 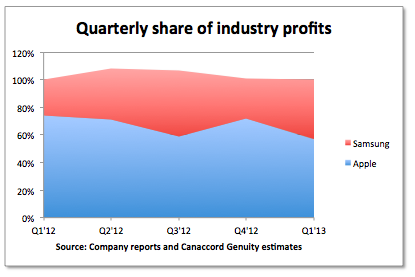 A day after the Canaccord forecast of “softer iPhone sales” came word from Morgan Stanley’s Katy Huberty, who wrote in a note to clients:

After a slow start, iPhone 5 is now on track to meet carrier volume expectations and iPhone 4 price cuts could stimulate incremental demand near-term.

Samsung could see a bounce in the June second quarter.

However, all reports suggest Apple will unveil multiple handsets in time for the third quarter, ending in September.

T-Mobile USA, which reported half a million iPhone 5 units sold, has helped improve shipments of the Apple smartphone. And with the upcoming iPhone 5S refresh and a rumored less-pricey iPhone reportedly launching later this year, whatever Samsung profit gain is likely to be short-lived.

This trading off between Samsung and Apple is not going to settle down.

As Walkley showed, the two mobile phone makers are essentially all there is, when it comes to profitable handset manufacturers. In other words, get used to this duopoly – it will be the face of mobile competition for the foreseeable future.

That’s not to say that carriers are cool with the status quo – quite the contrary.

Per The Wall Street Journal, some of the world’s biggest handset makers and wireless carriers are “embracing alternative mobile operating systems” to help nurture a third mobile platform as a credible alternative to the iPhone and Android.

How do you think stands a chance of becoming the #3 mobile platform, Windows Phone or BlackBerry?