We have often written how the handset market is essentially a duopoly of operating systems – iOS and Android – as well as brands: Apple and Samsung. Yesterday came even another way the two are dominating the mobile world – profits. Apple and Samsung accounted for 103 percent of handset profits in 2013, a figure made possible by the zero or negative growth by six of the eight leading handset makers. Apple held 69 percent of handset profits earned in all of 2012, more than double that of the South Korean Samsung, which hauled in 34 percent of phone profits last year, according to Canaccord Genuity…

By comparison, Nokia dropped to -2 percent of handset profits in 2012. The Finnish cell phone pioneer saw its profits flatline during the fourth quarter. Meanwhile, Motorola and Sony handset profits were much better, along with LG ending the year with -1 percent.

Although it ended the year as the third most-profitable handset maker, HTC struggled to post a profit of just 1 percent. In other words, Apple was 69 times more profitable. 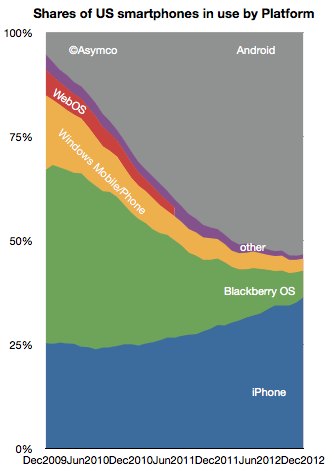 For the iPhone maker, that dominance was particularly evident during the holidays, when the firm received almost three-quarters of industry profits (via AppleInsider).

That spike likely was the result of the gifting of Apple’s iPhone, released in time to boost the company’s fourth-quarter. By comparison, Samsung’s share of handset profits fell during the holiday period, dropping to 29 percent. 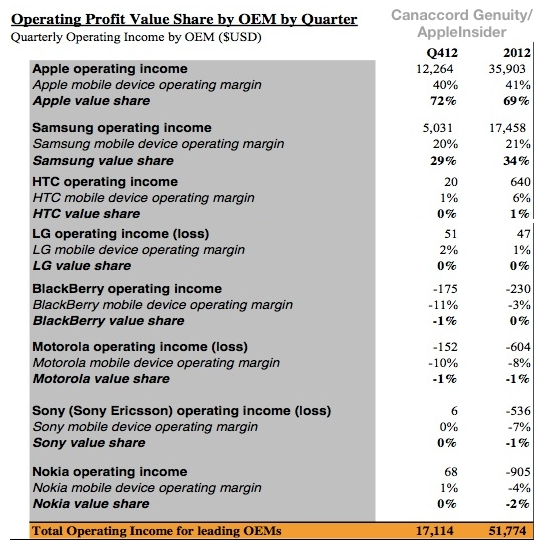 In a related development, we learned earlier today Apple’s iPad had 81 percent of online usage, according to the Chitika ad network. Amazon’s Kindle Fire was next best at 7.7 percent while Samsung’s family of Galaxy tablets had 3.9 percent of usage between December and January.

Was Apple’s profit figures for 2012 just a fluke?

Not likely, says Canaccord Genuity analyst Michael Walkley, who expects Apple and Samsung to keep a lock on handset profits “for the foreseeable future.”