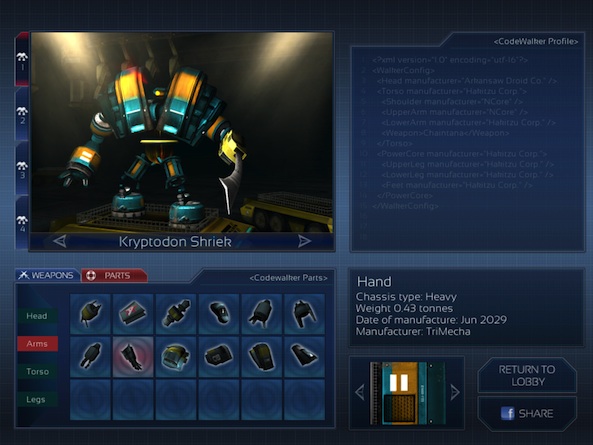 I like to pretend that I know a thing or two about computers. When I’m around my mom or friends that don’t play around with tech stuff too much, I always sound like a real pro. However, when I’m around my IT buddies, I tend to clam up. Throw around the word JavaScript and you have me running for the hills.

When I first discovered the universal app Hakitzu: Code of the Warrior, I was already excited about building giant fighting robots before I even found out that I’d be writing their movements in JavaScript.

If it sounds intimidating, don’t worry. Hakitzu was created for the purpose of teaching code. Everything you need to know to make your robot move, attack, and destroy is available as a learning tool in this game…

Picture yourself in 1986, watching a movie about what 2013 might look like. That is the basic look of this game. The landscapes are post-apocalyptic. The interface looks a little bit like it was created for Max Headroom (without the garish colors, of course). If Robocop had walked onto the scene, it would not have surprised me.

Players are taken through a basic tutorial on how to build a Codewalker in the Chop Shop, and then how to start a game in the battle arena. Once you’ve learned how to input the robot’s movement codes, you’ll be sent out on your first match. This is a multiplayer game. So, if you don’t have a friend to play with, you will be teamed up against a random Game Center opponent.

While you are typing out your robot’s movement in the code window, you will see the arena as a top-down grid. You will be able to determine how many squares to move and when to type in your attack code. Once you’ve entered all of your movements, you will see the action take place from the “debug cam” point of view. As the robot moves, you will see each code that you typed in the heads up display (HUD).

When your turn is over, you can wait for your opponent in the lobby. If the other player is taking too long, you can exit the app and play another game. When it is your turn again, you will receive a notification. 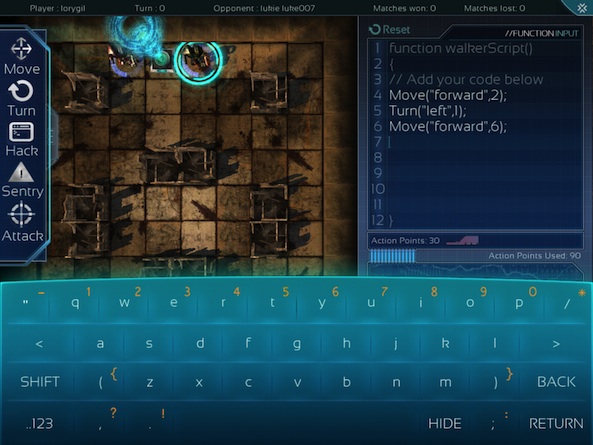 I’m not sure if you can call it game “play” so much as game creation. Players start by adding awesome armor and weapons to a pre-manufactured Codewalker. You can add shoulder guards, power cores, lasers, and flipping rocket launchers. Don’t forget to give your robot a sweet new paint job. In the Chop Shop, there is no code to write. However, your changes are logged in the Codewalker Profile.

After you’ve pimped out your Codewalker, you will be able to start an arena battle. Go to the //create.game section and connect with an online opponent. If you have any friends playing this game, I highly recommend choosing one of them. The random player generator produces very unresponsive games.

Once it is your turn, you will begin coding. The tutorial explains how to view sample movement codes and explains the “hacker keyboard.” After a quick rundown, you are on your own. To move your Codewalker, type a JavaScript command into the first line using the hacker keyboard. For example, you may want to move your robot forward two spaces. You will type the command Move(“forward”,2); and hit enter. See, I just wrote code. I didn’t think I’d ever do that.

When you execute a move, you will be taken to the arena where you will watch your coding in action. Your Codewalker will execute the movements you just entered. An HUD will be displayed next to the robot and the current movement will be highlighted as it takes place. When your robot is done, your turn is over and you must wait for your opponent to move.

I have never heard of a game like this for iOS. I love being able to learn the JavaScript language while commanding my very own robot. It is very easy to learn the proper code for each movement. The game offers sample codes for each command. All you have to do is change a word or number, like “left” or “6.” Even though there is very little action in the game because most of your time is spent typing lines of code, it is such a unique experience that it doesn’t matter.

Aaarrrggghhh! Why does this game have to be so buggy? First of all, it is nearly impossible to start a random game with a Game Center opponent. Once you do, the other player basically never responds. I started three games and was only able to successfully execute movement on one of them. The other player never took their next turn. In the other games, the player never responded to the call to battle.

In the one game that I was able to input code and execute commands, the action didn’t match with the code I entered. Admittedly, this was my first time writing code, but the game lets you know if you’ve made a mistake. The mismatch was with the number of squares my robot moved. For example, I typed in a command to move forward two squares and the robot moved three. My robot basically took his own route and didn’t care what I told him to do. 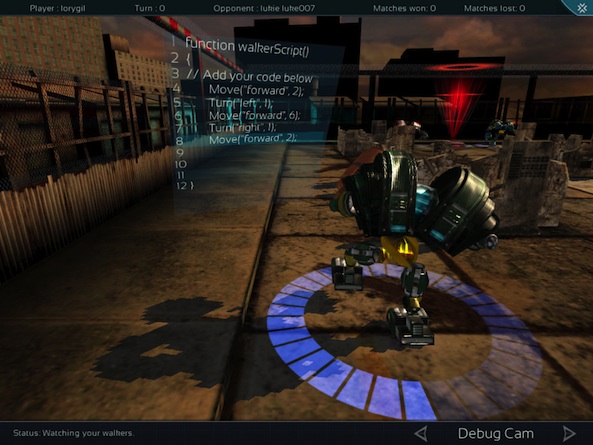 Learning code in a fun and entertaining environment at the cost of free is a good value. Battling giant robots in a post-apocalyptic arena on top of that is a great value. If the game actually worked properly, it would be a big win for everyone involved. As it stands, this is an awesome game that can’t be played.

Even though Hakitzu: Code of the Warrior is buggy and nearly impossible to play, I still recommend downloading it. My hope is that the game’s developers will see how much we love the concept and work even harder to make it a smooth, playable game. If nothing else, I’d like to be able to play solo so I could practice my coding.