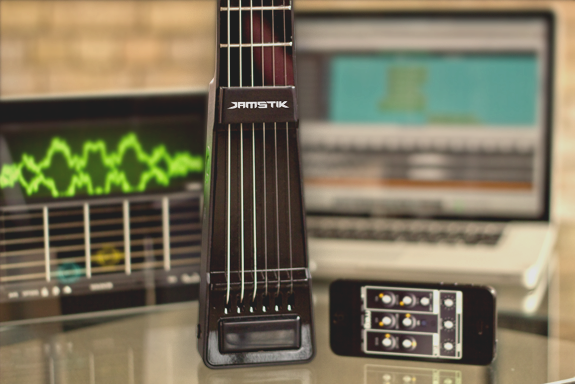 I’ve always thought it’d be cool to play the drums, or the guitar, so I’m always looking for easy ways to learn how to do so. But few products deliver on their claims that they make learning to play an instrument “easy.”

The Zivix team is looking to change that though, with its new musical accessory: the JamStik. It’s a tiny guitar with real strings and frets that can track your hand and finger movements for instant feedback and instruction…

The JamStik is about 15 inches long, and features a built-in, rechargeable Li-Ion battery. Its build allows you to fret and strum just like a real guitar, which is unusual in this space, as most music accessories have plastic details.

It connects to iOS devices and outputs via a MIDI connection that can be used in almost any audio application including Garage Band, inTone pro and Sunrizer. But begginers will probably spend most of their time in JamTutor.

Unfortunately, this isn’t an actual product yet. It’s just a prototype, and its developers have taken to Indiegogo to raise money to get it into production. $239 gets you on the pre-order list, though it’s currently on sale for $199.

I have to say I’m very intrigued by the JamStik, but I’ll reserve my judgement for after it launches. I’m hoping it’s the game changer it claims to be. And with nearly $100K in funds in just 2 days, a lot of people seem to think it is.