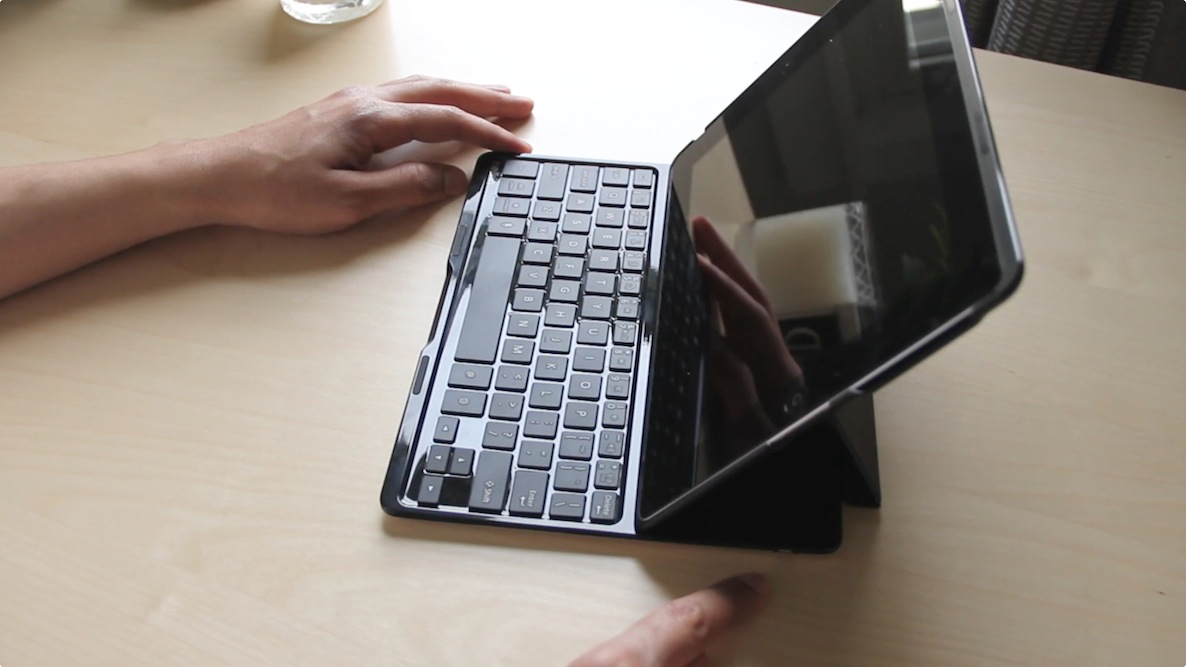 As someone who’s relegated the full sized iPad to the back burner, it’s admittedly a bit awkward to pull this thing back out. But the folks at Belkin have a new product for me to try, and it looks cool enough to convince me to dust off my iPad 3.

Belkin is no stranger when it comes to iOS accessories, but this — the Ultimate Keyboard Case for iPad — is perhaps its most thoughtful. The case, which officially launches in May, was created for people who want to get things done on their full sized iPads. It works with any currently available full-sized iPad, including the iPad 2, iPad 3, and iPad 4. It’s not the prettiest keyboard case on the block, and perhaps not the most durable, but it screams functionality.

Belkin sent me a product sample about a month ago, and I decided that I was going to put this thing through the paces. Instead of using it for a few days and reviewing it, I wanted to see if the case actually lived up to its moniker.

I’ve used the case to write blog posts, balance my budget, chat on IRC, write talks, reports, dictate transcripts, and a host of other things. In an almost Doctor Seuss inspired manner, I’ve used it in the coffee shop, in the car, at my desk, on the floor, outside, and practically everywhere else. In the end, I’ve found a case that has its share of flaws, but performs admirably as a productivity assistant.

The build of the Ultimate Keyboard Case is probably my biggest beef with this product. It’s not that any of the materials used are necessarily bad or low quality, it’s that so many different materials were used in conjunction with one another.

This makes the case feel a bit cheap, or thrown together. Almost a bit Frankenstein-ish, if you catch my drift. This case features an abundance of aluminum, plastic, faux-leather, and velvet like material, which makes for an interesting sensory experience.

You do get used to it eventually, but the case’s build never feels quite right; it never feels totally put together for an evening out on the town. Couple that with the fact that there’s a mix of fingerprint-loving shiny plastic, along with hard matte plastic, and it’s just an overall bizarre combination.

Without the iPad firmly snapped into place, the components feel a bit light weight and flimsy. You’ll soon realize that this was by design, because the case needs to be as light as possible to accommodate the already heavy iPad. Snapping the iPad into the case provides you with a reassuring “snap” sound, and the whole package feels vaguely similar to an 11″ MacBook Air.

Despite my grievances with build quality, this is a perfect example of the sum of the parts being greater than the individual pieces, because Belkin somehow makes it all work.

At its most basic level, the Belkin Ultimate Keyboard Case performs similarly to other products in the category. You open the case, the iPad awakens, you close the case, the iPad goes to sleep. One of the things that I really appreciate about Belkin’s entry, is the fact that the entire iPad is covered and protected.

This isn’t just a keyboard cover, it’s a full-on case that protects even the rear of your full sized iPad. You can almost separate the device into two pieces — the case in which the iPad snaps into, and the keyboard. These are connected together via an almost ribbon-cable like piece of faux-leather and suede. It’s not as precarious as it may sound — it’s sturdy, and its a setup that provides a mix of viewing angles, along with the ability to fold the case flat. 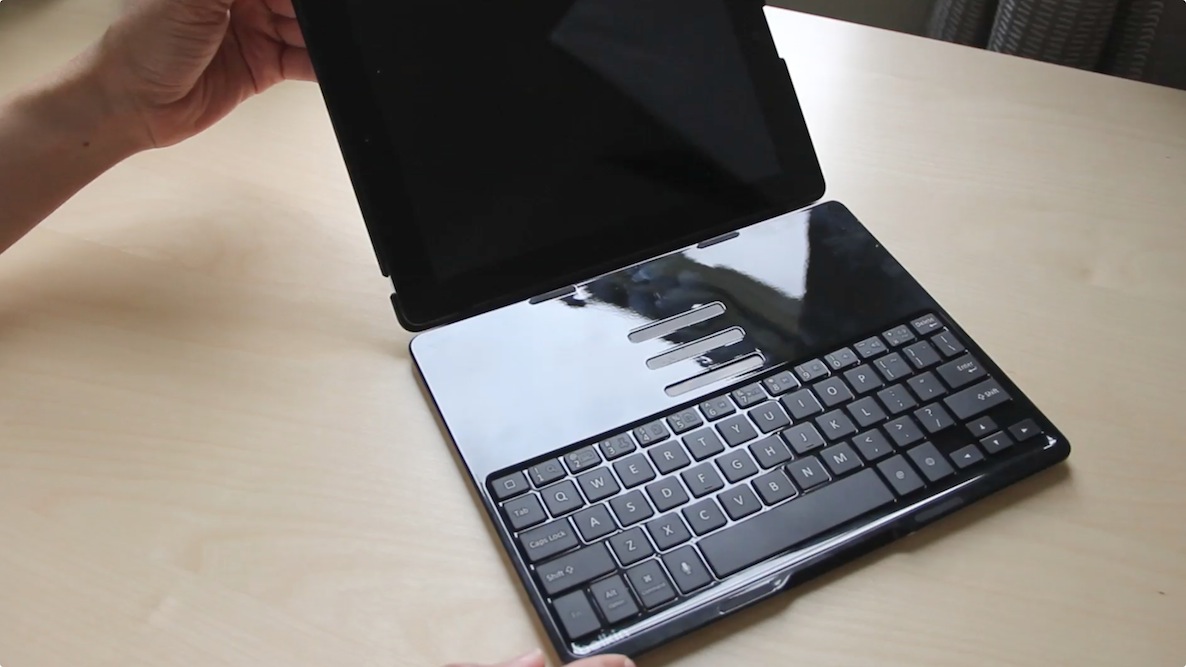 The magnets let you adjust the viewing angle

When the case is opened, the top portion containing the iPad can mount onto one of three magnets, which are strategically placed above the keyboard’s keys. By changing the magnet that the iPad portion of the case connects to, the user can easily adjust the viewing angle on the fly. I know that probably sounds a bit cumbersome in description, but I can assure you that it works fairly well that way.

Conspicuously missing from the Ultimate Keyboard Case is an on/off switch for the Bluetooth keyboard. That’s right, there is no on or off switch. That’s because the device is able to detect when it’s mounted on one of the magnets, and will instantly turn the keyboard on or off when necessary. As you might expect, the case is flanked by a blue LED indicator, which rests next to the USB-micro input used for charging the device. 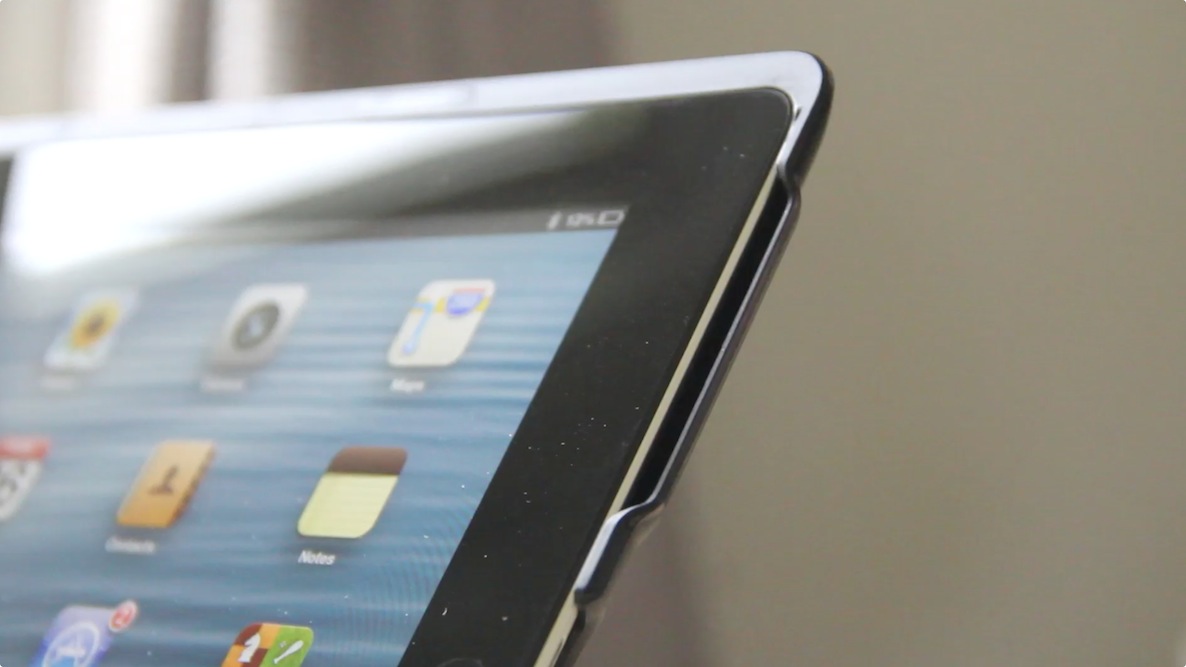 One last thing that I’d like to draw attention to is something that Belkin calls SoundFlow. This basically means that Belkin has designed the case to have a lip near the iPad’s rear mounted speaker grille. This lip seeks to port the audio from the speaker in the general direction of the user. I have to say, if you’re big on audio, this makes a noticeable difference in the way audio sounds. Instead of music being pushed behind you, which is one of my biggest complaints with the iPad design, the music can now hit its intended target. This makes Belkin’s case perfect for movie watching.

Of course, everything else about a keyboard case should play second fiddle to the star of the show — the keyboard. I’m happy to report that Belkin’s keyboard is one of the best keyboards that I’ve used on any keyboard case thus far. There’s plenty of key travel, which is hard to achieve for such a relatively thin package. The keyboard’s keys, while not as large as the keys on my 15″ MacBook Pro, are similar in size, and feature all of the keys you’d normally expect from a full sized keyboard of this type. 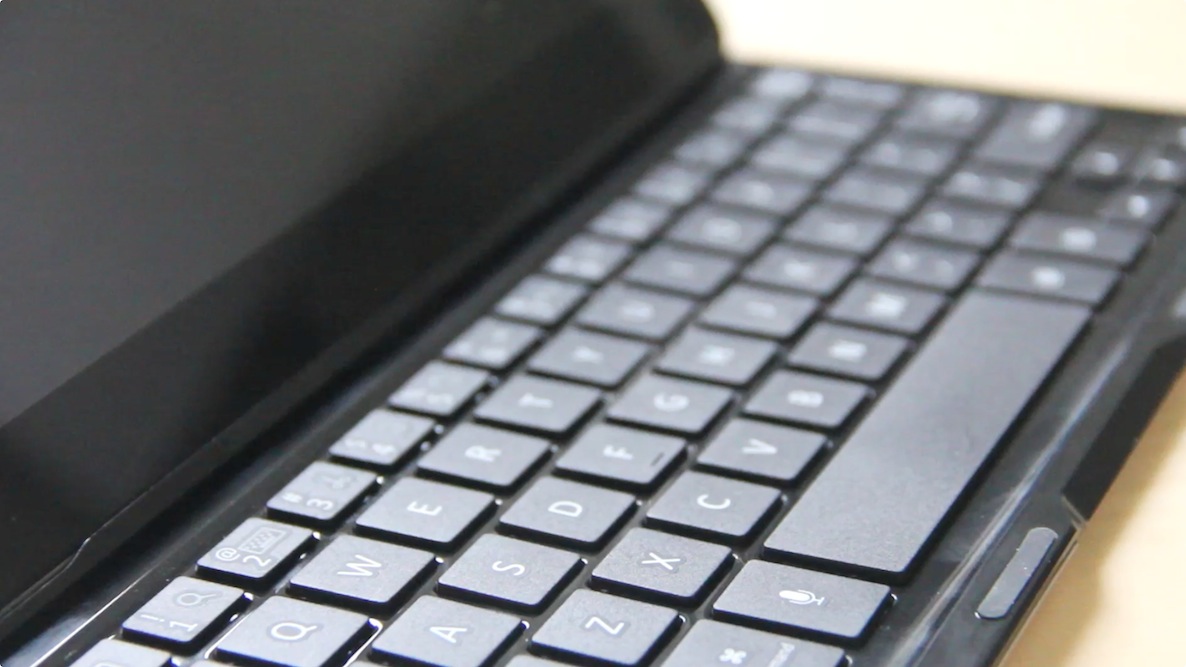 Keyboard keys made for serious typing

The presence of three different possible viewing angles goes a long way. For those who type a lot on their iPads, it’s hard to imagine that at least one of the available angles won’t be perfect for your needs. I even found that the case was suitable for typing on my lap, but only when using the angle associated with the magnet nearest the keyboard’s keys. With lap usage, the two wider angles made the magnets susceptible to failing due to the weight of the iPad mixed with the lack of stability on my lap. While resting on a firm surface, I found that all of the viewing angles worked perfectly.

If you’re aspire to be a serious typer with the full sized iPad, then I believe you’ll meet said aspirations with the Ultimate Keyboard Case. True, the design is a bit — unique, for lack of a better word; but, this is a design that’s obviously been through a lot of testing in Belkin’s labs, and frankly, it works. It’s probably not the thinnest package you’ll find either, but that’s because it’s a all-out case, meaning that both the front and rear portions of the iPad are protected from scuffs, scratches, and drops. With this being said, if either weight or form-factor are one of your primary concerns, then you’ll likely want to look in another direction. 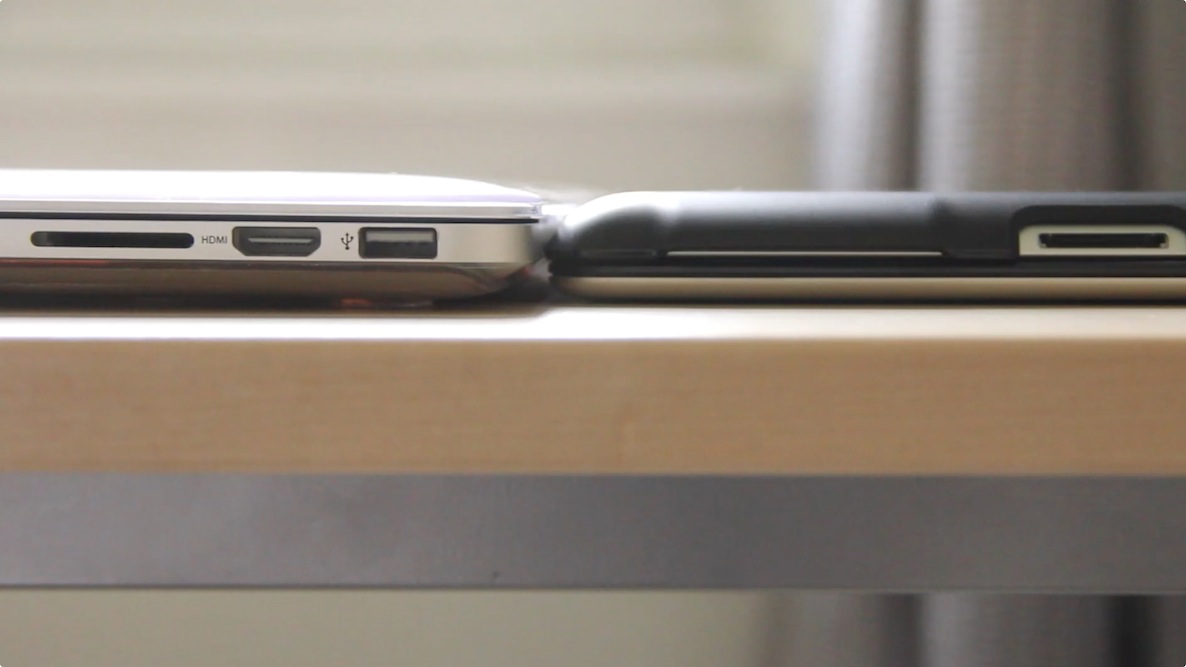 It’s not the most svelte case in the business

Although all of the above mentioned factors are important, the bottom line is that a keyboard case is worthless without a good keyboard. After using this case for nearly a month, I can attest to the fact that Belkin’s keyboard doesn’t mess around in this area. It’s a solid Bluetooth keyboard for your iPad. It features battery life that only required me to charge the device once during my entire month-long usage period. This is a keyboard case that’s always ready to go to work for you — just open it up, and start typing. If being productive on your iPad requires that you have a keyboard, then you should consider buying the Ultimate Keyboard Case for iPad.

The Belkin Ultimate Keyboard Case will be available in May for a suggested retail price of $99.99 for the slate version, and $129.99 for the silver version with white keyboard. Belkin provided me with a review sample of the case. Let me know your thoughts about it in the comments below.